Castlevania: Symphony of the Night/DXC

Castlevania:
Symphony of the Night

(Dracula X: Nocturne in the Moonlight)

Single player
The game Castlevania: The Dracula X Chronicles includes a port of the entire Castlevania: Symphony of the Night game, which can be unlocked by finding an item in the main game. The re-localized North American version includes items that had been dropped from the original PlayStation version and includes new dialogue that more closely matches the original Japanese dialogue, as well as new voiceovers using the same voice actors who appeared in the main game. This version also has a Japanese voice track in addition to the redone English track. The game does also feature redone sound effects. A new playable version of Maria was created for this edition as well, which plays more like her Castlevania: Rondo of Blood version rather than her Sega Saturn incarnation.

"After enduring countless struggles, Richter Belmont ultimately triumphed over the revived Count Dracula, brought back into this world by the dark priest Shaft.

Along her way, the sudden appearance of the vile Castlevania – said only to be resurrected once a century – made her destination clear.

After striking down his own father, Count Dracula, with the aid of Trevor Belmont, Alucard had sought to end his accursed bloodline by sealing his powers away and entering into an eternal sleep.

His slumber interrupted, Alucard learns of his vile home’s reemergence.

And so it was that a disparate group of fated souls were once more drawn to the Castlevania's foul gates, each with their own goals, as the ever-vigilant moon silently observed from its heavenly perch..."
— Official manual description for Castlevania: The Dracula X Chronicles

Main article: Alucard/Symphony of the Night 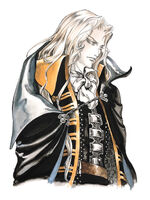 Born of the union between Count Dracula and a human. His androgynous beauty and delicate build belie tremendous physical prowess and a mastery of the dark arts. Though a melancholy and taciturn youth, he is intelligent and level-headed. 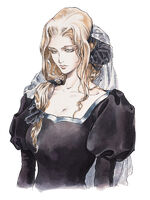 Alucard's mother, and the only woman that Count Dracula ever loved. Her attempts to save her village from a plague with hand-made medicines saw her tried and killed as a witch.

Main article: Dracula/Symphony of the Night 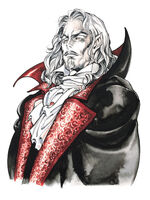 Alucard's father, lord of the cursed Castlevania, said to reappear once every 100 years, though count and castle alike were destroyed by Richter Belmont 5 years ago. Dracula stands supreme over the world's evil with his unparalleled black sorcery.

A new version of Maria was created for this game that differs from the one that appeared in the Sega Saturn version of the game. She plays similarly to the way she does in the main Dracula X Chronicles game and in Castlevania: Rondo of Blood.