A simplified version of Castlevania: Symphony of the Night on a Tiger Electronics handheld system.

The storyline is a simplified version of the original Castlevania: Symphony of the Night. One day, Richter Belmont disappears mysteriously. The dark priest Shaft resurrects Castlevania and Dracula, and with no Belmont present, Alucard must fight against his father. Alucard fights through the castle until he reaches his father and has a final showdown with him. 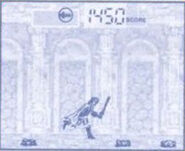 Alucard
The son of Dracula forced to fight his father.

Maria Renard
No mention of her is in the game, but there is artwork of her.

Lisa
Alucard's human mother. No mention of her is in the game, but there is artwork for her.

Dracula
Has been resurrected by the dark priest, Shaft. The final boss of the game.
Add a photo to this gallery

Alucard starts the game with a dagger and later gains a Jeweled Sword after beating the first stage. He also use three sub-weapons which he can pick up: an Ax, Throwing Daggers and a throwing Cross (which is only used against Dracula). Hearts increase his health. 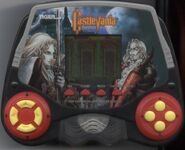 Retrieved from "https://castlevania.fandom.com/wiki/Castlevania:_Symphony_of_the_Night_(handheld)?oldid=280838"
Community content is available under CC-BY-SA unless otherwise noted.