E. J. Su
Castlevania: The Belmont Legacy is a 2005 licensed Castlevania comic book published by IDW Publishing and written by Mark Andreyko and drawn by E. J. Su. The story is based on Christopher Belmont's adventure from the 1989 Game Boy game Castlevania: The Adventure.

Issue 1 - Release Date: Mar 30, 2005
It is 1576, and the legend of the Belmont family's vampire-hunting prowess still echoes through the Romanian countryside. While Christopher Belmont celebrates his nuptials, dark forces conspire to raise Count Dracula from his unholy slumber. With this ancient evil unleashed once more, young Belmont must to prove he is worthy of the Belmont legacy. Based on the smash-hit Konami videogame series.

Issue 2 - Release Date: Apr 27, 2005
For many years, Dracula has slumbered, leaving the countryside in relative peace. But that peace is shattered by the rising of the ancient evil, who wastes no time in announcing his presence to his old adversaries, the Belmont family. Now Christopher Belmont must face the greatest challenge of his life. Based on the smash hit Konami videogame.

Issue 3 - Release Date: May 16, 2005
Dracula, newly risen from the grave, has spirited away the new bride of Christopher Belmont. Christopher and his companions desperately attempt to reach her before Dracula can kill or turn her, but they'll have to fight their way through a legion of vampiric zombies to do it! Based on the wildly popular Konami videogame.

Issue 4 - Release Date: Jun 22, 2005
Dracula's evil continues to grow as Christopher Belmont strives to save his wife, and the world, from the vampire lord. Belmont's allies, the Totoyans, are visited by a horror of their own when young Viktor is turned and attacks his grandfather and sister. Can Belmont turn the tide and defeat Dracula once and for all? Based on the smash-hit Konami videogame.

Issue 5 - Release Date: Jul 20, 2005
With the evil of Dracula roaming the Earth, Christopher Belmont must take up the mantle of his family's legacy and fight the beast to the death. But this time it's personal, as Dracula has captured Belmont's bride. Time is running out... will Christopher save his beloved from the vampire's wrath? Based on the smash-hit Konami videogame. 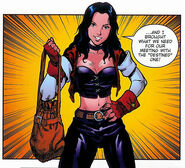 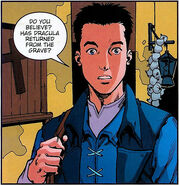 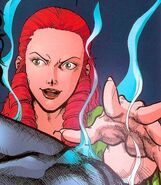 Alexei
A servant of Christopher who is in charge of his wedding ceremony. 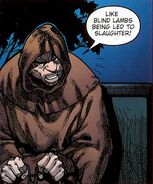 Goran
Ivan Bartley's stagecoach and a member of a cult attempting to resurrect Dracula. 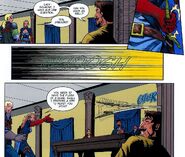 Gregory
An ally of Christopher who belittles Illyana's usefulness in combat, although he's ultimately put in his place by her. 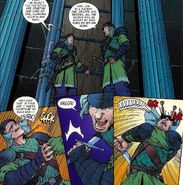 Nina
One of Illyana's bridesmaids. She remarks Illyana is so beautiful and would almost want her hand in marriage.