In the halcyon days of yore, overripe with peace and prosperity, not a soul believed that tomorrow could bring anything but more of the tranquil plenty about them...

Castlevania: The Dracula X Chronicles is structurally similar to the original Rondo of Blood, but has been rebuilt to portray a new 3D-based aesthetic. The original anime art direction has been replaced and character designs have been handled by long-time series' artist Ayami Kojima. The story and cutscenes are completely redone with new voice acting and with several alterations. Notably, the conversation between Dracula and Richter now exactly matches the one from the prologue of Castlevania: Symphony of the Night and takes place before the battle commences, instead of after it, as was originally the case. Furthermore, Maria's dialogue has been rewritten to be less blatantly humorous in order to match the more serious tone of the remake. The stage design shuffled a bit, certain candles drop different items and backgrounds have been completely altered in some instances; for example, in the room before the Minotaurs boss in Stage 3'.

The soundtrack has been remixed with contributions from Michiru Yamane and others. Certain tunes from the original game, like "Dark Desires" and "The Nest", have been replaced by "Tues Deus Meus" (an arranged version of Dark Desires) and "Moon Fight" from Castlevania Chronicles. A Boss Rush Mode and Sound Test option have been added to the menu. Finally, Stage 5' has been altered and a unique boss, the Hydra, is fought at the end.

The remake also adds in some plot elements, such as Shaft abducting Annette under Dracula's orders to be turned into a vampire. This plot addition, as well as the resulting boss fight with Annette if the player fails to rescue her in time, is similar to that in Castlevania: Dracula X, where if the player fails to rescue Annette, she is turned into a vampire (Carmilla in Dracula X and Lesser Vampire in The Dracula X Chronicles). In addition, unlike in Rondo of Blood, the overall script is altered between Richter Belmont's scenario and Maria Renard's scenario, with it being most notable in the good ending regarding Dracula's dialogue, where he instead expresses disbelief that he was beaten by a little girl, comments that it is power that always wins, with good and evil not existing, and also expressing some fascination that Maria still retained innocence despite the decayed world without even mentioning the nature of his revivals or alluding to Maria's Belmont heritage.

As the remake is not an exact sprite-by-sprite port from the original, some gameplay mechanics have been slightly altered, decreasing the overall difficulty of the game. However, in some instances the difficulty has been increased considerably (the battle against Dracula being a prime example) and some levels have been expanded with new areas to explore, some of which include new puzzles. Other new additions include certain obstacles that can only be bypassed after obtaining specific items. Furthermore, in the final battle with Dracula, he now displays a totally new –and much more difficult– form, with a wide repertoire of attacks.

The game includes an entire port of Castlevania: Symphony of the Night, which can be unlocked by finding an item in the main game. The re-localized North American version includes items that were removed from the US PlayStation version and includes new dialogue that expands over the original Japanese script's storyline, as well as new voiceovers using the same voice actors who appeared in the main game. 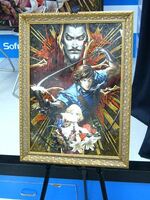 Five promotional events were held in Japan for Castlevania: The Dracula X Chronicles on 10/27, 10/28, 11/3 and 11/8. During the first three events a trial version of the game could be played. The last two events were held in Nihonbashi Mitsui Hall and the Akihabara Game & Hobby Museum in Tokyo. Series' producer Koji Igarashi and Ayami Kojima were present to talk about the development of the game. A special gift was also given to all the attendants.[5] Additionally, if the game was either pre-ordered by Messe Sanoh, Softmap, or Media Land, three unique phonecards could be obtained. 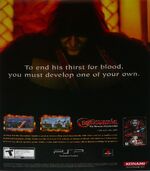