Template:Infobox CVG Castlevania: The Dracula X Chronicles is a 2.5D remake of Castlevania: Rondo of Blood for the PlayStation Portable. The game is known in Japan as Akumajō Dracula X Chronicle. It was initially unveiled by 1UP on February 1st, 2007 with footage being shown during the 1UP Show, and was released on October 23th, 2007 in North America, November 8th in Japan, and early 2008 elsewere.[1] 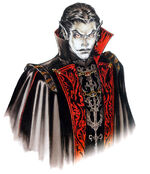 Differences from the Original Version

Castlevania: The Dracula X Chronicles is structurally similar to the original but has been rebuilt to portray a new 3D-based aesthetic. The original anime art direction has been replaced, and character designs have been handled by long-time series' artist Ayami Kojima. The story and cutscenes are completely redone with new voice-acting and with several alterations. Notably, the conversation between Dracula and Richter now exactly matches the one from the prologue of Castlevania: Symphony of the Night, and takes place before the battle commences, instead of after it, as originally the case. Furthermore, Maria's dialogue has been rewritten to be less blatantly humorous in order to match the more serious tone of the remake. The stage design shuffled a bit, certain candles drop different items, and backgrounds have been completely altered in some instances, for example, in the room before the Minotaurs boss in Stage 3'. The soundtrack has been remixed with contributions from Michiru Yamane and others. Certain tunes from the original game like Dark Desires and The Nest have been replaced by Tues Deus Meus (an arranged version of Dark Desires) and Moon Fight from Akumajō Dracula (X68000). A Boss Rush Mode and Sound Test option have been added to the menu. Finally, Stage 5' has been altered and an unique boss, the Hydra, is fought at the end.

Retrieved from "https://castlevania.fandom.com/wiki/Castlevania:_The_Dracula_X_Chronicles?oldid=191877"
Community content is available under CC-BY-SA unless otherwise noted.