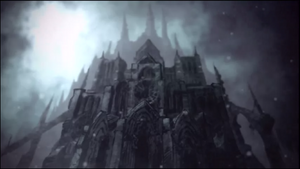 The Castle[1][2] (known as the Frankenstein castle, Bernhard castle, Vampire Castle[3][4] in Lords of Shadow, and Dracula's Castle in Mirror of Fate and/or Castlevania in Lords of Shadow 2) was the home of Vampire Dark Lord Carmilla and her vampiric horde.

It was previously owned by Friedrich von Frankenstein, Walter Bernhard and the Bernhard Family. When Carmilla took over, she drove the most of the Bernhard Family out, but kept Frankenstein in order to torture him, and to continue making creations for her. After defeating Carmilla and The Forgotten One, Gabriel Belmont, now known as "Dracul" or "Dracula", took residence in the castle.

It is said that castle was haunted long before the vampires came to dwell among its walls. The Bernhard clan made a pact with a hellspawn, which resulted in the building itself becoming possessed by the demon. It may have just been a myth to harm the reputation of the family, but the fact that the castle could be a living entity may explain how, after centuries, no one had been able to create a complete map of the castle, even after expending considerable resources on the task.

The castle's Maze Gardens were once the most beautiful in all of Europe. Many pilgrims would visit the Castle grounds from lands far away to witness their timeless beauty.

Although the castle's original owners are unknown, it was ruled by the Bernhard family, who were evidenced to be a group of evil sorcerers through their actions. Perhaps at an earlier time, same time and/or later, Friedrich von Frankenstein also owned the castle. Frankenstein, along with the Toy Maker became slaves under the Bernhards. At an unknown point in time, the Bernhard family had summoned the Forgotten One, a powerful demon. However, the Forgotten One was too powerful to control, and broke free. The events of this took place at an unknown time, although it could have occurred as a result of the Bernhard family attempting to fend off the Brotherhood of Light. The Brotherhood eventually managed to combine their powers to seal the Forgotten One into another dimension, and built a new area around the castle in order to house him in the event that he managed to escape.

At a point in the past, the Brotherhood of Light's founders were tricked into ascending to heaven, also splitting their light sides, which ascended to heaven, from their dark sides, which remained on Earth. The Lords of Shadow, as they were called, went their separate ways, although Carmilla remained in order to watch over in the event that the Forgotten One was to escape, fearing what would happen if he did.

Gabriel defeated the Forgotten One, and returned to the castle, taking residence in it as a Dark Lord. Here, most of the creatures bowed down to him. The structure of the castle changed dramatically by the Hunchback dwarves who took residence there and began to repair and expand on the castle. Gabriel, now known as Dracul and Dracula, used the castle as his base of operations for his planned vengeance on the Brotherhood and remaking of the world.

After Alucard and Simon defeated Dracula, the castle collapsed, though it would later be resurrected again along with Dracula. It would survive into modern times with its immortal master, surrounded by Castlevania City built around the expansive castle.

The castle's entity, having become bounded and dependent on Dracula, is capable of expressing consciousness. What would become known as the "Inner Dracula" soon sensed Dracula wanting to end his immortality. Unable to survive without a lord, the castle would become desperate to submit Dracula from his plans. The voices of the sentience would try to seduce, intimidate, and beg for Dracula to remain. Even Dracula's legions would be corrupted by the blood of the castle, showing that the castle would try anything to make Dracula abandon his past human life and family in order to ensure that Dracula remains in itself forever.

Certain areas of the castle appear to have existed in all periods, but different individuals take different routes through the castle to reach those areas.

In Modern times, the castle was obliterated in the last war with Dracula down to its foundations. Colonists built Castlevania City on these remnants. Areas of the castle remain are primarily the catacombs under the city, and the above was built in a style reminiscent of the castle.

Below is a list of known castle areas, in order of progression.

Lords of Shadow - Mirror of Fate

This castle represents the castle as it appeared shortly before it was destroyed by the Great Explosion, and is filled with 'memories' of the Brotherhood of Light laying siege to the castle, as well as the bodies of fallen Brotherhood members. The castle itself is actually a curse Dracula suffers from that forces him to remain in a dream world inspired by his memories. The dream castle is a very real place, akin to its own pocket dimension and the servants and people within are themselves real, but they're only representations of these people formed from Dracula's memories. How and when this curse came about remains a mystery, but it appears to have been around ever since Dracula went to sleep. It's possible that the book of Dracul is the source of the curse, as it functions as an advanced brotherhood scroll that allows Dracula to access memories he's already placed within the book to help him deal with the amnesia that comes with long periods of sleep. it should also be noted, however, that the book of Dracul also allows Dracula to interact with these memories and even change the outcome to some degree, as the game over screen shows him closing the book on his defeat before opening it back to a checkpoint. it's possible that the book of Dracul lets Dracula change his own past. This wouldn't be the first time he's implied to have tried to manipulate fate, he once attempted to rebuild the time machine from Reverie, the clock face of which can be seen outside his tower during Simon's chapter in Mirror of Fate.

Lords of Shadow - Mirror of Fate 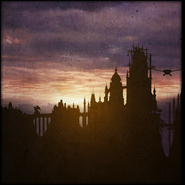 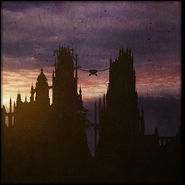 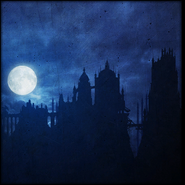