An anachronism is a chronological inconsistency; an appearance of an event, circumstance, person, or object that's out of place in the given time.

The world of the Castlevania animated series is fictional. While it borrows elements from real history, it also contains several intentional anachronisms in comparison. Especially, the vampire civilization portrayed in it possesses advanced technology and magic, and vampires are stated to have made many discoveries ahead of humans.

Antarctica is already discovered and mapped. It is featured on the map in Alucard's old room in the castle.

Americas exploration is already common knowledge. South America can be seen appearing on the Captain's map in his quarters. While historically, Viking explorers reached North America way before the events of the series, their discovery wasn't common knowledge, and cartographers didn't have access to such information until later.

Captain's quarters with the map on the wall showing South America. 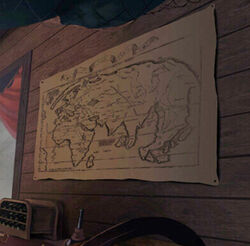 A lamp with an incandescent light bulb in the secret part of the mausoleum in Gresit.

A small steam engine can be seen in Dracula's laboratory; however, it's not clear whether the technology is widely known by vampires or something developed by Dracula himself.

When the Bishop and his goons were wrecking Lisa's house in Lupu, Burly got startled by activating a centrifuge. Historically, the usage of centrifugation for separating particles in a liquid was discovered centuries later.

Centrifuge in Lisa's lab in her house in Lupu.

Vampires are capable of manufacturing glass thinner and in more complex shapes than humans do, as evidenced by laboratory glassware and light bulbs used by them.

Various fruits and vegetables originating in the Americas and which were historically not available in Europe at that time can be seen in the series. In Lindenfeld's market, there are cherimoyas and papayas available for sale. Furthermore, bell peppers, tomatoes, and what appear to be potatoes can be seen as part of meals. 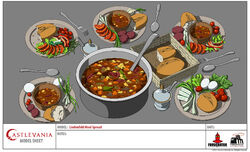 Lindenfeld meal featuring bell peppers, tomatoes and what appears to be potatoes.

Katie Silva, a character designer in the show, stated that vampires wear more modern clothing than the humans in the animated series, explaining in an article:

"For Morana, I wanted her to look really out of time but also regal. Vampires wear more modern fashion than humans in Castlevania (Alucard invented the V-neck), so there's more room to play with clothing periods. Morana's the oldest, probably thousands of years old. Her shawl is a kaunake-type thing that she's either kept for thousands of years or adapted from something else as a reminder of older times, while her outfit top is more Elizabethan. Morana has modern makeup because she's an icon, and one of the biggest challenges was trying to do that eye makeup myself at 2 a.m. to test my abilities."

"For Saint Germain, the big deal was trying to figure out how to adapt a pre-existing character for a show where he has a different function in the story", describes Silva. "I put him more solidly in the Tudor time period, like he's a few years more advanced than the rest of the folks clothing-wise but not as much as the vampires. I gave him a Shakespearean doublet because I thought he was an actor playing a part and because they're hot. His cane actually is the same rough design as the sword he carries in the concept art. The really hard thing for him was that he was described as wearing really fine clothes that were broken down and worn with age, but that's hard to do with flat colors because [to me] it implies a textural element. Saint Germain has the greenish coat because that's kind of the color a fine, rich, black coat gets when it's been in the sun too long. Saint Germain keeps his shirt untucked because he really is tired and isn't looking to really impress these Lindenfeld folks as much as if he were younger."[1]

For example, the Council of Sisters wear more modern dresses than the aristocrats back in the 15th century, such as Lenore wearing undergarment in "The Harvest" (S3E09) and Alucard having a zipper on his pant (as he can be heard zipping his pants up) in "Murder Wakes It Up" (S4E01).

Lenore's undergarment in "The Harvest".

Dracula's traveling outfit model from "Witchbottle" (his outfit appears to be Victorian).

Saint Germain's outfit is very similar to the fashion in the Tudor period. 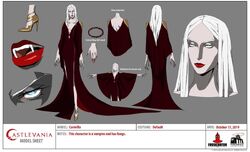 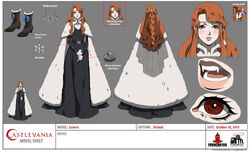 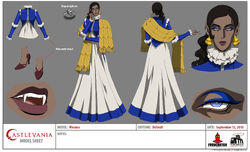 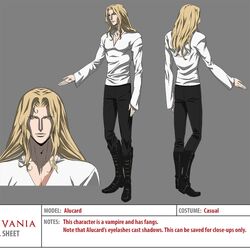 A baseball bat can be seen in Alucard's childhood room which resembles a modern baseball bat (this can hint that baseball was already possibly invented by vampires). Alphabet blocks can also be seen, predating the oldest known mention of them by roughly a hundred years.

Baseball bat among Alucard's toys in his childhood room.
Community content is available under CC-BY-SA unless otherwise noted.
Advertisement