References to the Castlevania series 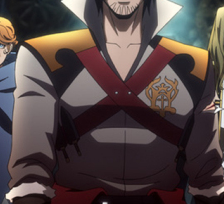 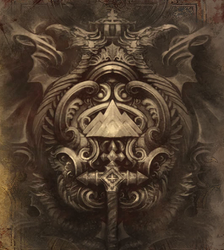 Belmont Crest
Add a photo to this gallery

At the conclusion of Season 1, Episode 4 "Monument", Alucard has a fight with Trevor, but later he decides to join forces with him and Sypha Belnades against Dracula. This is possibly a reference to the fight between Trevor and Alucard and its conclusion in Castlevania III: Dracula's Curse.

Alucard's boss fight in Dracula's Curse.
Add a photo to this gallery

To forge night creatures, Hector uses a hammer, which design is based on Warhammer, one of the weapons available to Hector in Castlevania: Curse of Darkness. 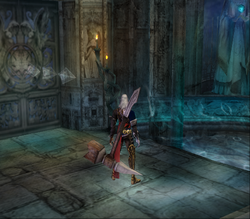 Hector equipped with Warhammer in Curse of Darkness.
Add a photo to this gallery

Various artifacts in the Magician's inner sanctum are references to objects from the games. 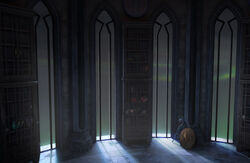 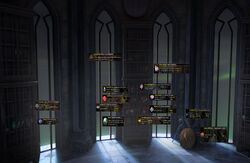 Artifacts references in the inner sanctum

Magician in his inner sanctum
Add a photo to this gallery

References to other media

In Season 3, Episode 2, "The Reparation of My Heart", the shopkeeper in Tunis specializing in mystical objects Isaac speaks to can be seen cleaning or polishing a mask that looks similar to the Stone Mask from the manga/anime series JoJo's Bizarre Adventure. Notably, the mask is green with red and gold decor, as opposed to carved grey stone, and lacks fangs.

The Collector polishing a mask.
Add a photo to this gallery

The book on vampire magic and philosophy that Lenore gave to Hector uses text translated into Latin from Bram Stoker's 1897 Gothic novel Dracula.

“Here, there is one thing which is different from all recorded; here is some dual life that is not as the common. She was bitten by the vampire when she was in a trance, sleep-walking—oh, you start; you do not know that, friend John, but you shall know it all later—and in trance could he best come to take more blood. In trance she died, and in trance she is Un-Dead, too. So it is that she differ from all other.

Usually when the Un-Dead sleep at home”—as he spoke he made a comprehensive sweep of his arm to designate what to a vampire was “home”—“their face show what they are, but this so sweet that was when she not Un-Dead she go back to the nothings of the common dead. There is no malign there, see, and so it make hard that I must kill her in her sleep.”

This turned my blood cold, and it began to dawn upon me that I was accepting Van Helsing’s theories; but if she were really dead, what was there of terror in the idea of killing her? He looked up at me, and evidently saw the change in my face, for he said almost joyously

Visible text of the book

The triangular notepad that Saint Germain is using for his diary is a reference to historic manuscript The Triangular Book of St. Germain.

The diary in the series is using Lorem ipsum type of pseudo-Latin text, while the real manuscript[1] is written in French using a substitution cipher.[2]

Lorem ipsum in the diary text.
Add a photo to this gallery

The map of Greater Styria survey that Carmilla presented to her sisters from the council is signed by her cartographer as Stephen Stark T.X. It's a reference to the lead background artist and supervisor from the Powerhouse Animation studios.

Greater Styria map by Stephen Stark T.X.
Add a photo to this gallery

Retrieved from "https://castlevania.fandom.com/wiki/Castlevania_(animated_series)/Easter_eggs?oldid=295323"
Community content is available under CC-BY-SA unless otherwise noted.