Block 1 (ブロック1, Block 1?) is the first level of Castlevania. It consists of the entrance hall, the crypt, and another corridor. It's a very iconic area of the Castlevania series, and has inspired many similar areas that appeared later on.

The stage starts outside the castle; torches can be whipped in order to power up Simon's Vampire Killer. The next screen is a long main hall, where Simon will be attacked by zombies, bats and leopards. After reaching an non-passable wall, it's required to descend down into the water-filled area inhabited by fishmen. This subterranean cavern leads to the other side of the wall. Finally, another long hall not unlike the first part of the stage is entered, with the same enemies. 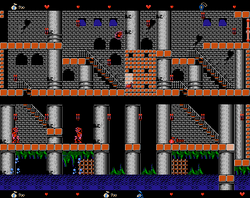 The Phantom Bat flies across the screen and occasionally swoops down to attack Simon. An easy strategy is to use the Axe and the Double Shot which can be found nearby. Make sure not to get cornered by staying in the middle of the room. Dodge its swoop attack by simply moving left or right. An alternative method is to use the Stop Watch when it's near. Make sure to move away when it unfreezes, because it will continue its attack as soon as it can move again. 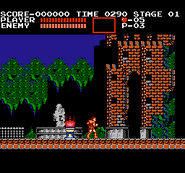 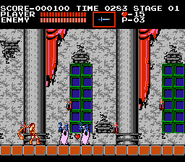 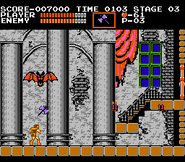 Retrieved from "https://castlevania.fandom.com/wiki/Castlevania_Block_1?oldid=278273"
Community content is available under CC-BY-SA unless otherwise noted.