This stage takes place in an upper section of the castle. Hunchbacks make their first appearance here, jumping down at Simon in the initial portion of the stage. What follows are platform-filled areas where Ravens and Skeletons will often act as obstacles at strategic spots and hinder the player's progress. In other areas, Ravens and Bone Pillars will form similar obstacles, as well as Skeletons. On the final part of the stage, Medusa Heads have to be dodged while trying to defeat more Bone Pillars. 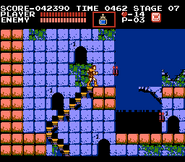 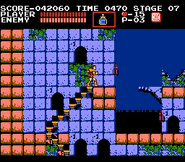 Other versions
Add a photo to this gallery

Retrieved from "https://castlevania.fandom.com/wiki/Castlevania_Block_3?oldid=289270"
Community content is available under CC-BY-SA unless otherwise noted.