Nothing to Lose
Black Night

Block 5
N/A
Block 6 is the sixth and final stage of Castlevania. It represents the clock tower and the castle keep of the castle.

The game's final stage starts with a long bridge guarded by five Phantom Bats. The next couple of screens comprise a clock tower initially inhabited by skeletons. Deeper in, several gears have to be climbed while assaulted by hunchback-carrying eagles. Afterwards exiting the tower, a staircase will appear. Beyond awaits the final boss of the game, Dracula. 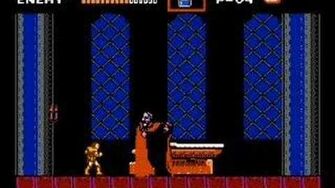 Castlevania Stage 6 + Ending
Add a photo to this gallery

Retrieved from "https://castlevania.fandom.com/wiki/Castlevania_Block_6?oldid=324576"
Community content is available under CC-BY-SA unless otherwise noted.