Castlevania Puzzle:
Encore of the Night

Single player
Castlevania Puzzle: Encore of the Night is a puzzle video game for mobile devices, part of the Castlevania series, developed and published by Konami, initially released on the iPhone and iPod Touch on July 16, 2010, and later on Windows Phone, both in the United States only. It is a retelling of the events of Castlevania: Symphony of the Night, and as such it uses the same premise and characters. While it reuses most assets from Symphony of the Night, these have been retouched for aesthetical improvement.

The game is mainly a drop pieces puzzle game, although combined with role-playing elements. The player is presented with different path options throughout the course of the game to explore Castlevania and fights enemies in versus puzzle matches. It counts with an inventory system where the player can equip different items –such as weapons, armor and relics– that grant a variety of boosts and powers, as well as powerful spells they can use in battle. In addition, it has an experience system that allows the player to level up, gaining with this points they can then allocate to different stats in order to customize their character.

The game was initially released for US $4.99, but due to poor sales it quickly dropped its price down to US $0.99. It was eventually removed from the iOS App Store sometime before October 2016 and is no longer available for purchase.

Being a retelling of the events in Symphony of the Night, Encore of the Night uses the same premise, without significantly modifying its storyline.

It's been four years since Richter Belmont succeeded in ending the menace of Count Dracula, Lord of the Vampires, who had been brought back to life by the dark priest Shaft. However, Richter has now mysteriously vanished.

Her friend and battle companion, Maria Renard, set out to look for him. Not knowing where to begin her search, Castlevania, the castle of Dracula, which is rumored to appear only every century, has suddenly materialized out of the mist as if to show her the way.

Meanwhile, powerful forces were struggling for the soul of a man named Alucard; the same Alucard who had teamed up centuries ago with Trevor Belmont to battle his immortal father, Count Vlad Tepes Dracula.

In order to purge the world from his cursed bloodline, Alucard had entered into what was supposed to be an eternal slumber, but now, he is awake and aware of the evil once again at work in his homeland.

The player takes the role of Alucard, Count Dracula's son, on his mission through Castlevania to put an end to his evil father. He won't do this alone, though, as he'll meet several other characters along the way, each with their own pending business to take care of within the castle. Overall, the game follows the same premise as Castlevania: Symphony of the Night, and as such it includes the same characters, enemies, locations and plot events, with minimal variations to the storyline. One of these variances, however, is that the Master Librarian is met at the beginning of the game, who guides the player through the tutorial and remains as an adviser during the rest of the adventure.

The player starts at the castle's entrance, where they are presented with several paths they can take to further explore the building. Some of these areas aren't accessible from the beginning, though, and the player will need to venture further into the castle in order to collect the necessary means to reach them.

The structure of the castle is very similar to that in Symphony of the Night. Each room consists of a different area of the castle, having its own distinctive design. These, for the most part, are mere aesthetics, though, as they serve only as backdrops for the main core of the gameplay: the puzzle battles against enemies.

Each time the player enters a new room, they will have to fight an enemy in a drop-pieces puzzle match (quite similar to Capcom's Super Puzzle Fighter II Turbo). The layout of these matches consists of two playfields –one for each opponent– where gem-looking blocks drop from the top. As usual with these types of games, the main objective is to align several blocks of the same color (three or more in any alignment) to make them disappear and with this free some space on the player's side. Setting up chain combos allows the player to build up "attacks" which, once ended, are then delivered to the opponent's area in the form of several blocks they'll then have to deal with. The greater the number of blocks that are removed, the more powerful the attack will be. There are also blank/inactive blocks that are harder to get rid of (usually only through clearing adjacent blocks). The player can also equip collected items such as weapons, armor, spells and relics that determine the power of their attacks, as well as their resistances against those from the opponent.

However, unlike most other games in this genre, in Encore of the Night a match doesn't end when the blocks of a player/enemy's playfield reach the top; instead, each character has a lifebar which depletes a little every time they receive damage. If a character's playfield gets filled with blocks and another attack is on its way, then the game determines how many rows of blocks must be destroyed in order to accommodate the incoming assault. This means that huge comebacks are possible from either side. In addition, an hourglass is located between both playfields which shows how long each turn is and if whatever damage the player has accumulated through matches and combos is dealt to any of the players. The match ends whenever any of the two opponents' lifebar depletes to zero. If the match was won in the player's favor, then more areas of the castle become accessible to be explored.

Enemies get more difficult as the player progresses through the game, becoming faster, smarter and building up more complex attacks, usually setting up big chain combos to unleash devastating attacks on the player.

The game also counts with an experience system that builds up with each defeated enemy, allowing the player to level up and gaining with this ability points; these can then be allocated to different stats –such as Strength, Stamina, Intelligence and Luck– in order to customize the player character.

In addition, points can also be allotted to different elemental spell systems, which can be used in battle with different effects:

Arcade Mode mainly consists in simple matches against the CPU for a more casual play. The player is offered a roster of characters they can choose from –both heroes and antagonists– each having two specific forms of attack. An opponent must then be selected as well, and also an area within the castle where the match will take place. 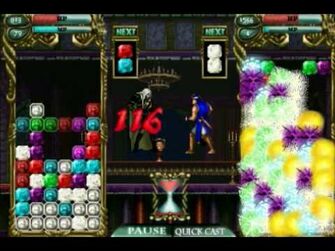