Cats in Castlevania: Order of Ecclesia can be rescued along with villagers. Each time a cat has been rescued, it can be found again somewhere in Wygol Village. The Arma Felix glyph allows Shanoa to turn into a werecat herself and be able to communicate with these friendly felines. They will usually share a cryptic hint regarding a secret hidden in one of the levels.

There are four cats in Order of Ecclesia. They are found in specific areas of dungeons and can be rescued by pressing ↓ on the D-Pad while near them. It's very easy to identify if a cat is nearby, since its meowing sounds are heard across the current room. After rescued, they can all be found again in specific areas within Wygol Village:

Tofu
A white cat found in the Monastery.
Stays with Laura at her house.

SoyBeanFlour
An orange cat found in Minera Prison Island.
Stays with Jacob at his shop.

Ink
A black cat found in Mystery Manor.
Stays with Daniela at her house.
Add a photo to this gallery

Tom has a little backstory in the game. Apparently, at first he was just a stray cat. Anna, a little girl from Wygol, brought him in, fed him, and gave him a home at her side. In gratitude, he promised himself to protect her at all costs. While attempting to drive away the evil spirits which continuously wanted to possess Anna, Tom went into the mountains and ate copious amounts of a special flower that served for this purpose. The plant resulted to be poisonous, however, putting his life in danger. Father Nikolai advised Anna that only a rare rock known as chrysoberyl could save him. Shanoa aided the girl in getting the gem, first bringing it to Laura, the town's jeweler, who appraised it into a dog's collar from a previous canceled order, so Tom could carry it with him at all times and be always safe from harm.

Shanoa needs to equip the Arma Felix glyph in order for her to understand the language of the cats.[1] 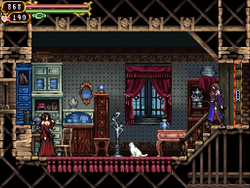 "Hi! I'm Tofu! Our names are kind of funny, huh? Think so? We came from far away, but now I really like it here!" 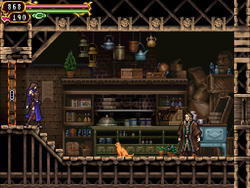 "New around here, huh? Make sure you say hi to my feline friends. We know...secrets. Important ones."

"Get spotted in prison and a scary machine comes out. ...But that doesn't mean it's not worth fighting." 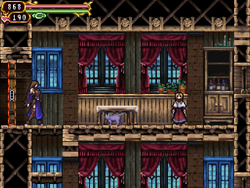 "I'll protect Anna, even if she is high maintenance..."

"I'm not gonna let some evil spirit have Anna. No way, no how!"

"So you figured it out. ...a shame everything ended in failure."

"Score! This has got to be the best collar ever. In all my years, I've never had anything so fancy. ...little tight, though." 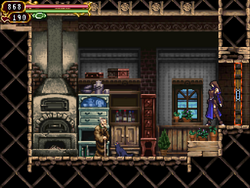 Secret in a Black Room

"In a room as black as me, there's some treasure, see? Get rid of the ouchy things and you're home free."

Three cats (Tom being the exception) will share a clue regarding a secret hidden in the very same stages they were found:

Tofu's location in the Monastery

Anna and Tom when they are first rescued in Somnus Reef

Ink's location in the Mystery Manor

The player interacting with Ink using the stylus

Retrieved from "https://castlevania.fandom.com/wiki/Cat_(Order_of_Ecclesia)?oldid=251221"
Community content is available under CC-BY-SA unless otherwise noted.