For the general environment, see Catacombs.

Abandoned Pit to the Catacomb
N/A

The Catacombs (地下墓地, Catacomb?) is the storing room for all sorts of victims who met their end years ago. A variety of skeletons can be seen packed into the walls of this place, as well as lined up against the wall. Eerily colored bricks comprise the structures of the catacombs, as well as several cavernous hallways containing rivers of lava. The spooky piano music here adds to the eerieness.

The Catacombs are the lower-most level of the Castle and are only accessible from the Abandoned Pit to the Catacomb. The counterpart to this stage in the Reverse Castle is the Floating Catacombs. 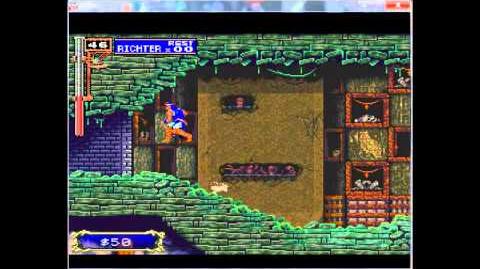 The Catacombs is the third stage of the LCD version of Castlevania: Symphony of the Night. Salem Witches (actually Salomes) join the Zombies, Medusa Heads, and Bats that were fought in earlier stages. Defeating the boss called Succubus (actually Fake Sypha) will give Alucard the Gold Ring.

Retrieved from "https://castlevania.fandom.com/wiki/Catacombs_(Symphony_of_the_Night)?oldid=287721"
Community content is available under CC-BY-SA unless otherwise noted.