For the organization, see The Church. 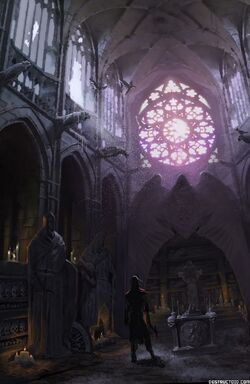 Cathedrals, Churches and Chapels (including Monasteries and Temples) are common environments in the Castlevania series. The nature of chapels varies, but almost always they are a part of Dracula's Castle. Who and what is worshiped in these places is debatable, considering that Dracula has renounced God and there's no mention of Satan within the main continuity.

An explanation to their frequent inclusion throughout the series could be as a form to represent a sacrilegious act by employing buildings that were once used to worship God, and which are now in a desecrated state and under the influence of evil. Places in which it doesn't matter the amount of religious imagery they may contain, if there's no God around or faith on him, they're just beautiful to look at, but nonetheless useless, trinkets.

Furthermore, in some games the ceremony that is held to resurrect Dracula takes place precisely inside a church, perhaps as a way to represent blasphemy, mocking God's name by bringing to life the ultimate evil inside what was once a holy place where people professed their beliefs.

Chapels are usually found in towers. Like clock towers, chapels usually link to the Castle Keep.

The most common feature of chapel areas are stained-glass windows, which are featured in nearly every appearance of a chapel in the series. In addition, chapels may also feature massive bells, which players can often stand on top of to play a tune, and in late games, jump inside of to collect the Bell item.

Other features typical of chapels are large stairways and long vertical towers.

While Dracula's Castle is usually filled with monsters that have an affinity to darkness, enemies found in chapels are weak to it and strong to the Holy attribute. Here, it is common to encounter enemies such as the Amalaric Sniper, or ghostly enemies such as Ghost Dancers and Giant Ghosts.

Retrieved from "https://castlevania.fandom.com/wiki/Cathedrals,_Churches_and_Chapels?oldid=281721"
Community content is available under CC-BY-SA unless otherwise noted.