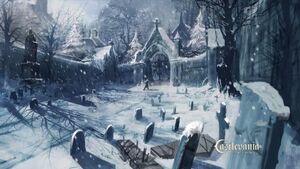 Cemeteries and Graveyards are common environments within the Castlevania universe.

With Gothic style being the predominant theme seen along the various titles that conform the Castlevania franchise, it may not come as a surprise seeing graveyards to frequently appear among them. From them, Count Dracula can quickly assemble his most basic forces each time he comes back from the dead, by reanimating the remains of those buried there and letting them loose to wreak havoc throughout the land, breaking out of their coffins and digging their way out of the earth from these once holy grounds, and serving as a distraction while he organizes his more powerful armies in a new attempt to regain his own power and finally conquer the world.

These armies of the undead are conformed primarily by zombies and skeletons which quickly raze nearby villages, taking the townspeople off guard while they witness in horror their once loved ones now turned into foul creatures craving for human flesh.

Cemeteries generally can be found in the outskirts of a city or a village. It's not uncommon to see rapacious crows or vengeful spirits inhabiting these places as well, although many other creatures may also lurk in them... especially at night.

Legend has it that sometimes traveling gypsies can be found hiding among their graves, and it's said they may present useful (and sometimes even magical) items to adventurers, should they be drawn out by the scent of garlic.