Cerberus (ケルベロス, Keruberosu?) is a recurrent boss in the Castlevania series. It is a large hellhound with three heads. It possesses an extraordinary jumping ability and can spew fireballs or a constant stream of fire.

In Greek mythology, Cerberos (in Greek Κέρβερος Kerberos, "demon of well") was the dog of Hades. He was a canine monster with three heads (although sometimes it's said that he had fifty or a hundred) and with a many-headed serpent in place of a tail.

Cerberos guarded the door of Hades and ensured that the dead did not leave and that the living could not enter. He was son of Echidna and Typhon, and the brother of Orthrus, a two-headed hellhound.

The myth of a supernatural guard dog watching the gates of the underworld dates back to ancient Indo-European mythology. Other such watchdogs of the underworld include the bloodstained dog, Garmr, of Scandinavian mythology, who serves a role much akin to Cerberos, and their more benevolent cousins, the Welsh Cŵn Annwn, who were the spectral guard dogs of the paradise otherworld, Annwn.

Concerning his name, it is unclear if there is an association with Cerbere (Naberius) from the Dictionnaire Infernal, although in 1583 Johann Weyer considered both of them to be the same demon.

Keruberosu is the first boss in Dracula X. It starts the fight by roaring and jumping into the screen. It will attempt to close toward Richter's current position throughout the course of the encounter and, after being hit or being too close, will jump back and spew a flame diagonally-down that will traverse along the ground. Keruberosu will jump forward afterward.

Faithful to some of the creature's classic descriptions, its tail resembles a serpent in this incarnation. Oddly enough, its roar resembles more that of a big feline rather than a canine.

Cerberus is the boss of the Abandoned Pit to the Catacomb. He has four main attacks:

Cerberus can be easily defeated, though. For example, if Alucard brings either the Holy Water or Vibhuti sub-weapons and stands on top of a column, Cerberus will try to aim diagonally but most probably won't be able to do it properly and miss. Alucard may then just drop several flasks/ashes at him, dealing heavy damage.

Note that while his fireballs are multicolored, all of them are Fire elemental attacks.

The player will be quickly ambushed by a pack of Cerberi as soon as they enter the Villa. These canines are very quick and agile, and some also have the ability to spew fireballs in a spreading manner.

Once the first wave has been dealt with, the gate that leads to the Villa's courtyard will open; at this point, another pack of Cerberi will leap over the fences and attack.

Once the second pack has been dealt with and when everything seems to calm down again, the sky will darken and the Ghost Cerberus will appear, who is more fierce and dangerous than its brethren and can unleash a large and continuous stream of flames upon his preys.

Exclusive to the original Castlevania 64 version, there's an invisible platform which can be climbed onto located to the right side of the level's starting point; from there, the player may have an easier time dealing with the pack, given they can use ranged attacks.

Cerberus appears at the end of the Catacomb as the first boss in Circle of the Moon. This time it looks very similar to the Wargs from Symphony of the Night, but even if it appears to have only two heads in this portrayal, upon close inspection to its in-game sprite, a third ear can be seen on the upper part of its body, which most probably belongs to a third head.

The Double necklace can be found in the next room after defeating it.

While Cerberus itself doesn't appear in Order of Ecclesia, a set of three glyphs, called Custos, must be found in order to complete the game, each glyph representing one of its heads. Two of them are arm glyphs and the third is a back glyph (which works like a harmless version of Dominus Agony).

Shanoa will eventually find a statue of Cerberus in the Forsaken Cloister and will make a comment about it, hinting that the player must find all three Custos glyphs and use them in that room. Furthermore, every time she absorbs one of these glyphs, she'll comment about returning to the statue. These glyphs are:

Once she has finally acquired all three glyphs and used them on the statue, the path that leads to the Final Approach will reveal to her, allowing her to finally confront Dracula.

Cerberus and Griffin concept sketch from the canceled Castlevania: Resurrection by Greg Orduyan.

Cerberus from Circle of the Moon.

Cerberus's enemy list entry from The Dracula X Chronicles version of Symphony of the Night.

The Cerberus statue in Order of Ecclesia. 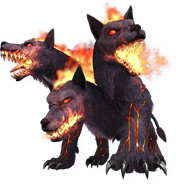