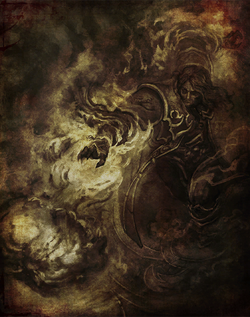 The Chaos Bombs are Dracula's projectile weapon in Castlevania: Lords of Shadow 2.

Several pieces of burning mineral escaped when the Chaos Claws were forged and became trapped in the depths of the fortress. Some creatures searched for them to control the great power of fire that they store inside. However, only the Lord of Vampires is capable of transforming it's power and of projecting it against his enemies.

Retrieved from "https://castlevania.fandom.com/wiki/Chaos_Bombs?oldid=252179"
Community content is available under CC-BY-SA unless otherwise noted.