Battle of the Holy (The Adventure)

Count Dracula resurrected in the year 1576, one hundred years after his death at the hands of Trevor Belmont and his team of heroes. At that time, the Count's one hundred year resurrection cycle became evident. Christopher's blood called for him to challenge Dracula and seal his evil nemesis away for another one hundred years.

With the Vampire Killer, the very same whip Trevor used to first destroy the Count, Christopher set off toward Dracula's Castle, passing through a graveyard, a cave and a booby trapped tower before reaching the Dark Lord's dwelling. Christopher met and defeated Dracula in battle and afterward escaped the castle before it could crumble atop him.

On a hillside cliff, Christopher watched the castle decimate into rubble and walked away from the site of his victory, reassured he had destroyed the Count. Unbeknownst to Christopher, Dracula escaped destruction by turning into mist. The vampire would eventually fly away in bat form from the ruins of his castle and patiently lie in wait for an opportunity to strike back against the Belmont Clan.

Christopher Belmont's son, Soleil, was coming of age as a Vampire Hunter. There was a celebration in honor of his passage into manhood. The inhabitants of Transylvania were confident their peace would be long lasting with both Christopher and Soleil keeping a vigil over the land.

Meanwhile, Count Dracula was staggering from his crushing defeat 15 years prior. He survived the battle with Christopher, but was too weakened to bring his body out of the mist form that saved his undead life. Dracula took note of Soleil and saw him as an opportunity to become whole and defeat Christopher.

The day after the celebration, Soleil disappeared and four elemental castles arose. Christopher broke into the castles and destroyed their guardians, causing the elemental spirits of the castles to drift away, and Count Dracula's castle emerged from the earth. Within the castle, Christopher found Soleil, but Dracula had magically influenced him and turned him against his own father. The two engaged in a duel that ended with Christopher's victory, releasing his son from Dracula's influence. Soleil told his father that Dracula was going to use the four castle spirits to become whole again. Christopher pressed on for the final confrontation with Dracula and destroyed the Count, ridding the world of him for the time being.

Christopher and Soleil watched Dracula's castle fall with full confidence that he was gone and the Belmont bloodline would strongly continue.

Christopher's personality has only ever been explored in the comic series Castlevania: The Belmont Legacy, which is debated on whether or not it's canonical. Nevertheless, it shows Christopher as a more reluctant hero compared to his predecessors and successors. He is plagued by nightmares of Dracula, which he fears is an omen to his return. His stress is increased by the knowledge of the mass destruction and death that the Dark Lord caused when he was alive. He hopes that he never has to face those same kind of horrors that his ancestor Trevor did, and just wants to live in peace with his newly wed wife. When Dracula is resurrected by a dark cult and immediately desecrates the grave of Christopher's parents, the latter realizes that his time has come to take up his families' destiny. Because of his battles Christopher overcame his fear and reluctance, and fully accepted the Belmont clan destiny of passing down the whip for generations to come. 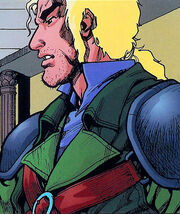 Christopher was given a more developed background in the 2005 graphic novelization Castlevania: The Belmont Legacy, which elaborates on the events of Castlevania: The Adventure and greatly expands it by introducing an entire new cast of characters, as well as Christopher's motives for setting forth to the vampire's castle.

The setting of the comic changes drastically from that in the game, now appearing to take place in the Victorian era. It also changes Christopher's status in society and now presents him as a member of a honorable family (probably of noble heritage).

However, even though The Belmont Legacy is an officially licensed product, it has never been used as reference in any further products of the Castlevania franchise, and therefore, all events on it are assumed to take place in an alternate continuity.