"A monster that lurked within Dracula's Castle when it was sealed inside the solar eclipse last year. Possessing the ability to control time, it had tried to impede Soma's progress. It is close friends with Zephyr."
— Dawn of Sorrow's Chrono Mage's Library description.

The Chronomage (also spelled Chrono Mage) is an enemy in Castlevania: Aria of Sorrow. He is a rabbit that uses a clock to stop time. Strict in regards to tardiness.

The Chronomage is loosely inspired by the White Rabbit character from Alice's Adventures in Wonderland, written by Lewis Carroll.

In the story, the White Rabbit is first encountered by Alice as she falls down a rabbit's hole into Wonderland, and is seen later on serving the King and Queen of Hearts.

The Chronomage in the game sports a waistcoat, a stopwatch, and is "strict in regards to tardiness", much like the White Rabbit in the story.

The Chronomage is a rabbit-like creature who uses a clock to stop time. He is impossible to defeat through normal means, immediately spotting the player whenever they approach him (or even attack) within the area he is in, and using his clock to reverse time, effectively transporting the player to the previous area. Because of this, the only way to defeat him is by acquiring Galamoth's soul, which grants the Time Stop Immunity ability, or by using his own soul. 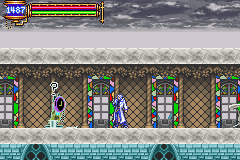 Soma can find the Chronomage very early in the game, in the Inner Quarters. He stands solitary in the long hallway that leads to the castle's infants' quarters, and where both the Ancient Book 2 and Dainslef can be found.

Getting near the Chronomage or attempting to attack him will only make him take out his stopwatch and reverse time, forcing Soma to return to the previous room and making him impossible to pass. Soma requires to find Galamoth's soul in the Underground Cemetery first, in order to become immune to time manipulation and finally be able to damage him.

Although it is possible to reach the Chronomage before acquiring either Galamoth's or his own soul, he is still invulnerable prior to casting Time Stop (almost the same invulnerability as the Sky Fish). 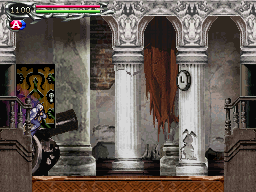 The Chrono Mage makes a one-time cameo appearance in Dawn of Sorrow. When Soma enters the first room of the Silenced Ruins, a cannon will fire at a pillar that bars the way. However, the Chrono Mage's magic will stop time before the cannonball can reach its target (interestingly, the spell doesn't affect Soma). His silhouette can also be seen engraved on said pillar.

The player first has to obtain and use Zephyr's soul, Clockwork, in order to progress, effectively resuming the passage of time and allowing the cannonball to continue its way, breaking the pillar.

After this room has been entered for the first time, a new entry will appear in the Library; in it, it is revealed that the Chrono Mage has a strong connection to Zephyr, another time-controlling demon.

Chronomage's enemy list entry from Aria of Sorrow
Add a photo to this gallery
Retrieved from "https://castlevania.fandom.com/wiki/Chronomage?oldid=281450"
Community content is available under CC-BY-SA unless otherwise noted.