The Claimh Solais is a greatsword in the Castlevania series. An indefatigable sword. Its blade glitters with light.

In Irish mythology, Claíomh Solais (IPA: [kɫiːv ˈsɔɫɪʃ]; also known as the "Sword of Light") was a sword that came from Findias and belonged to Nuadha Airgeadlámh (Nuadha of the Silver Hand), who was leader of the Tuatha Dé Danann and King of Ireland. In legend, the sword glowed with a bright light, hence its name. It was non-resistible in battle and had the power to cut his enemies in half.[citation needed] It is one of the Four Treasures of Ireland (the others being the Spear of Lugh, The Dagda's Cauldron and the Stone of Fal).

The Claimh Solais is the most powerful weapon available to the player in Normal mode (sans the extra weapons from the time trials and the Final Sword). The sword is a Holy weapon, so it is particularly strong against enemies with the Dark attribute, and it has one of the longest reaches of any weapon. It is also swung vertically, giving it a wide and protective range. Not enough with this, the weapon grants a STR, CON and INT boost of +7 when equipped.

While its physical damage is not as high as Death's Scythe, it is overall more powerful as a result of the Holy attribute. This makes the Claimh Solais more powerful against dark enemies, whereas Death's Scythe is remarkably weak against these. Likewise, the Claimh Solais is noticeably weak against Holy-based enemies, and therefore it is strongly advised not to be used against enemies with these characteristics (such as Julius Belmont). Use the Balmung or a similar weapon instead.

Unlike its following appearances, the sword is held in only one hand and its recovery time is much faster; whereas in the sequels, the sword is strictly held with both hands and the player is forced to wait for the entire (and slower) animation —proper of all greatswords— to end before being able to move again (in Aria of Sorrow, this can be alleviated by jumping before swinging the sword).

To obtain it, the player must first get past the big waterfall located at the Underground Reservoir. To accomplish this, equip the Undine soul in order to be able to walk on the water's surface and then activate any of the three Rush Forms available in the game (Curly, Devil or Manticore) to make it across the falling stream and reach the other side, which leads directly to the Forbidden Area.

Make way through the initial cavern until reaching a flooded area, enter the sunken ship found there and exit through the left side of its hull. Advance a bit further until reaching a dead end and hit the wall to make it crumble and reveal a secret room, where the sword is located.

The sword appears once again in Dawn of Sorrow. The Alastor soul is needed in order to craft the weapon via Weapon Synthesis. However, this version of the Claimh Solais is very different from its predecessor, as it does not raise any of the player's stats when wielded, making it considerably less powerful this time around.

Its Special Attack (A button) summons a giant armor-clad arm wielding a giant Claimh Solais that follows Soma's swing with its own attack, giving it more reach.

There are actually two variants of the sword that can be obtained in this game, both with different stats and only wieldable by Soma Cruz:

Claimh Solais from Aria of Sorrow

Claimh Solais from Dawn of Sorrow 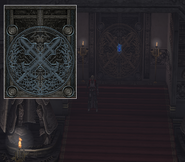 Retrieved from "https://castlevania.fandom.com/wiki/Claimh_Solais?oldid=303921"
Community content is available under CC-BY-SA unless otherwise noted.