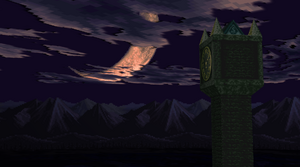 The Clock Tower is a recurrent area in the Castlevania series, perhaps being the most infamous of them all. They have been featured in almost every game since the series began. These areas are generally conformed by a series of large, vertical rooms where all sorts of heavy clockwork machinery can be seen, such as giant rotating gears, large chains moving up and down, giant swinging pendulums and metal counterweights, just to name a few.

Most clock tower areas feature moving platforms in the form of large gears, as well a spike-covered walls and pits. While the gears move the character slowly, becoming petrified by a Medusa Head will prevent movement for a period of time and greatly increase any further damage taken. Occasionally, the spikes and gears are used together; for example, if the player stays on a moving gear, they may be pressed against a spike-lined wall, dealing immense damage. In Super Castlevania IV and Castlevania Chronicles, some of the gears fall off and try to hit the player. In Dawn of Sorrow, a few new traps were added, such as rotating spike-covered beams and pistons that rise to push the player against the spike-lined ceiling.

The first two Game Boy Advance games, Castlevania: Circle of the Moon and Castlevania: Harmony of Dissonance, have differently designed clock tower-like areas. While Circle of the Moon has no area named "Clock Tower", encountered somewhat early in the game is the Machine Tower, which utilizes the typical "clock tower" music from previous installments and employs similar features.

Harmony of Dissonance's clock tower is perhaps the weakest in the series. There are few enemies (only Harpies and Gold Medusa Heads), and the gears are used to little effect and manly for a few easy-to-solve puzzles involving them.

A few games feature a characteristic room (or rooms) often referred to as the "room of clocks", where several grandfather clocks can be seen perfectly aligned in the background and all have their pendulums swinging in perfect synchrony with each other. These rooms are usually found either within or after completing the clock tower level, although sometimes they can be found in a totally different area. Likewise, as the series progressed, the big clock to which all the machinery seen throughout the level is for, is found at the end of the level and serves as the location where the battle against the area boss takes place.

Most clock tower areas feature Medusa Heads, generally in two varieties: a blue head with green hair and another with a gold head and brownish-red hair that can turn the player to stone upon contact; depending on the game, the bestiary entries for them may be separate or lumped together. The Gorgon Head, a rarer, silver Medusa Head, was introduced in Castlevania: Order of Ecclesia, which, even if it has exactly the same powers as the Gold Medusa Head, it has a guaranteed drop of the Fidelis Medusa glyph.

Death, Dracula's confidant, typically resides in the Clock Tower, although in some games he may be encountered in other, usually underground, areas as well. In recent games, Death's two loyal servants, Slogra and Gaibon, usually appear here as well. Other common enemies include Harpies and other sorts of flying foes to increase the difficulty of traversing the area's many obstacles. Of note, Circle of the Moon features a boss called Iron Golem and Dawn of Sorrow's Cursed Clock Tower is not home to Death, but to an enemy named Zephyr, whom appropriately has the ability to stop time. However, since the castles in which these two games take place are not Dracula's, these instance are not as odd.

It's also here where Trevor Belmont fights (and has the option of gaining as an ally) Grant Danasty in Castlevania III: Dracula's Curse.

The Clock Tower is usually in the (upper) right part of the castle, although in a few games, it's not. Typically, it is the highest section of the castle and usually leads to Dracula's chamber via a large stairway.

At the very top of the Clock Tower, there's usually a room in which the background displays the 'outside' of the castle, as well as a panoramic view of the clock itself; such instances are somewhat rare in the series.

The area usually can be seen in the background on the stairway leading to Dracula's keep. Two such towers were seen in Lament of Innocence, suggesting there may be multiple towers.

For more information about music in the series, see Soundtracks.

Retrieved from "https://castlevania.fandom.com/wiki/Clock_and_Machine_Towers?oldid=264132"
Community content is available under CC-BY-SA unless otherwise noted.