The Coffin is an enemy in the Castlevania series.

Coffins, caskets and sarcophagi are boxes where the dead rest. In many Castlevania installments, Count Dracula's casket can be seen lying in the background of the castle's throne room. In some occasions, the vampire himself is seen rising from it once the player finally makes it to his chamber, or after he has been resurrected by his minions.

In recent games, however, coffins have taken a more interactive role, acting as enemies that usually attack either by chasing the player in an attempt to snatch them inside and trap them for eternity, or by spawning endless hordes of undead creatures.

The Save Rooms in Castlevania: Symphony of the Night feature caskets inside where the protagonist Alucard, a dhampir, can sleep in and take a rest from battle.

Even though caskets don't appear as enemies in Dracula's Curse, they play a significant role in a couple of boss fights. Either two or three caskets will be found standing in the background of these boss room, where a malign spirit known as the Death Fire will also be seen floating over an altar. The entity will then proceed to enter one of the caskets and bring back to life whatever atrocity was being held inside. These enemies can either be a pair of Mummies, a Cyclops, or even the diabolic Leviathan.

Dracula himself is not present to face off against the player in this parody game, but an empty coffin handles any intruders for him. It is shown to have legs and contains a trap when opened: a boxing glove on springs.

The Snapper Casket, as its name implies, awaits for prey to pass by and then starts giving chase while "snapping" its lid in an attempt to trap them inside it. It initially remains stationary and shakes violently every once in a while before turning hostile. This variant can only be damaged once it has commenced its attack, so the player actually has to walk past it in order to trigger it and be able to destroy it.

On the upper levels of the Halls, a gathering of possessed caskets can be found levitating and forming a spinning circle in order to hinder the player's progress. These can be struck and destroyed from a safe distance, however, making them just a minor setback.

In the Japanese version of the game, it had a cross on the lid. It was removed from the overseas releases in an act of censorship.

Coffins are found inside of Save Rooms where Alucard (or any other playable character) is able to sleep and save game progress. A special purple coffin found in the Underground Caverns leads him to a nightmare world where he faces the Succubus.

The fight against Akmodan II in Death Wing's Lair starts with a solitary sarcophagus standing in the middle of the room from which the boss comes out.

Some coffins conceal hidden paths in Dracula's domain. A coffin found at the end of the Villa will lead the player to many different areas depending on the hour of day it is entered at.

A coffin briefly appears at the beginning of the game, containing Count Dracula's undead body. It was destroyed when Camilla used her magic to unseal him.

In the Catacombs, levitating coffins can cause damage when the lid is forced open by the Mummy inside. An endless number of mummies may then come out of them if not destroyed. 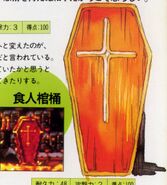 Retrieved from "https://castlevania.fandom.com/wiki/Coffin?oldid=261126"
Community content is available under CC-BY-SA unless otherwise noted.