Combat Crosses (バトルクロス, Battle Cross?) are ancient weapons created by Rinaldo Gandolfi and used by Gabriel Belmont and his descendants —most particularly Trevor, Simon and Victor— in the Lords of Shadow series.

Combat Crosses are whip-flails which said to be given to high-ranking warriors in the Brotherhood of Light. While there are apparently many of them, there is only one true Vampire Killer, the greatest weapon Gandolfi ever created. All other Combat Crosses are replicas of the weapon.

In Act III of Castlevania: Lords of Shadow - Mirror of Fate, Trevor is able to improve this Combat Cross by locating the last creation of Rinaldo Gandolfi. This is a spike tip hidden within Castlevania; it allows the user to imbed the chain into a heavy stone door, shattering the door by pulling it towards them. He then used it in an attempt to kill his father, Dracula. During their final battle, he was stabbed through the chest by his own weapon.

In Act II, Trevor awakes years later as a vampire called Alucard. As a creature of the night, he is unable to wield this weapon any more, and so he uses the Dark Pain weapon instead. Meanwhile, his son, Simon Belmont, in Act I, searches the castle for his father's original weapon. When he locates it, a Necromancer steals it from him, stating that his master, Zobek, wants it, and battles Simon. Simon defeats him and pulls the cross out of the Necromancer's remains, and is able to use the weapon to use grip and rappel points. It is not as powerful as it once was, but it is still a better weapon than the leather Beast Hunter that Simon had been using. He uses it when he and his father face Dracula.

Aside from the Vampire Killer, the only whip seen by Dracula that is not vampirically produced in the 21st century is a Combat Cross wielded by the last descendant of the Belmont Clan, Victor, Commander of the Brotherhood of Light. He utilizes this weapon both in his battle against Dracula, in an attack against a disguised Alucard pretending to be Zobek's Lieutenant, and in his subsequent battles alongside them both against the Army of Satan until his death at the stone blade of a statue enchanted by Nergal Meslamstea.

In an interesting case, CR Pachinko Akumajō Dracula shows Richter Belmont, in his Dracula X Chronicles incarnation, wielding a Combat Cross of his own instead of the leather whip version of the original Vampire Killer he is shown with in artworks.

Most of the Combat Crosses themselves get no permanent damage upgrade or have any outstanding supernatural powers.

The Combat Cross appearing in Mirror of Fate has a Combat Chain, which allows it to use grappling points and attack enemies from a distance. In Act III, it was also able to utilize the Magnetic Rails (similar to the Improved Dark Pain). It would later be able to pull apart locked doors (now known as the Improved Combat Cross). It lost these last two abilities by the time Simon used it in Act I. 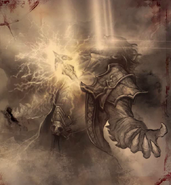 Retrieved from "https://castlevania.fandom.com/wiki/Combat_Cross?oldid=249816"
Community content is available under CC-BY-SA unless otherwise noted.