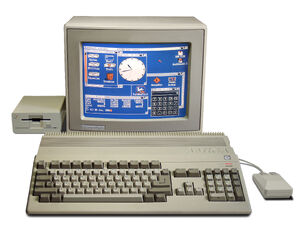 The Amiga is a family of home/personal computers originally developed by Amiga Corporation as an advanced game console. Development on the Amiga began in 1982 with Jay Miner as the principal hardware designer. Commodore International introduced the machine to the market in 1985, after having bought Amiga Corp. The machine was ahead of its time, sporting a custom chipset with advanced graphics and sound capabilities, and a sophisticated multitasking operating system, now known as AmigaOS. Based on the Motorola 68k series of 32-bit microprocessors, the Amiga provided a significant upgrade from 8-bit computers such as the Commodore 64, and the Amiga quickly grew in popularity among computer enthusiasts, especially in Europe. It also found a prominent role in the video production business.

Retrieved from "https://castlevania.fandom.com/wiki/Commodore_Amiga?oldid=258803"
Community content is available under CC-BY-SA unless otherwise noted.