Cordova Town (Town of Cordoba in the Japanese version) is a location in Castlevania: Curse of Darkness. It is accessed from the caves in the Forest of Jigramunt and leads to the Eneomaos Machine Tower and later the Aiolon Ruins.

The lower town of Cordova is a flat town-scape. It is arranged in a grid-like road system with boarded up houses on all sides of the roads. Generally, east-west roads are connected by several short north-south road segments.

Coming out of the Forest of Jigramunt leads to a short road in the town that comes to a T intersection. Traveling north takes you to the Middle Section, while traveling south leads to a path heads south, then east, then north again which also leads to the Middle Section. This path encircles a single block of town. On the eastern side, you can see an HP Max Up and a Park Swing beyond a grate that you cannot go under yet.

Backtracking: Once you have a Devil-Type Innocent Devil with the Magic Circle ability, you will be able to go underneath the grate and grab the HP Max Up and sit on the Park Swing. Trevor will find a DEF Up here.

The middle section mostly consists of a long east-west road on its south and north boundary, with three separate road segments connecting those two roads. Two roads on the south-side of the southern road lead to the Southern Section, while two roads on north end of the northern road lead to the Northern Section. The south-western section of this road system is a town fountain, where the Cordova Town Map can be obtained. There is also a dead-end path heading west from the town's fountain that turns north, east (where a Warp Device can be found), and ends in the Chair Room, which exists in another dimension where all of the chairs that you have sat on are gathered in one place.

The path that heads north out of the Northern Section will head north, then angle west (where there is a Save Chair) and make its way toward the Upper Town.

The upper town is an area that is higher than the rest of the town.

A westward long winding path of stairs going up a hill is the first section of the Upper Town. The last set of northward stairs leads to both the Western Path to the west and the Northern Path of the Upper Town to the North.

The Western Path eventually leads to a Bench and some caves that contain the Wind Ring. The cave leads to the Mortvia Aqueduct.

The Northern Path heads east to a cliff side where you can look down below on the town. It then leads to another cliff side. To the north of this cliff is a grate you cannot go underneath yet, but the path also doubles back and heads west again. This eventually leads to a Save Point and the town square where you will fight Isaac for the first time.

Path to the machine towerEdit

Heading north from the town square is an area where you can gain the Mage-Type innocent devil. Ahead is the Eneomaos Machine Tower, but in order to get there, you will need the mage's Time Stop ability. 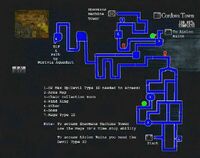 Retrieved from "https://castlevania.fandom.com/wiki/Cordova_Town?oldid=260002"
Community content is available under CC-BY-SA unless otherwise noted.