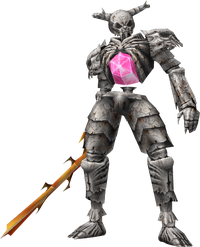 Corpsey is a Battle-Type Innocent Devil found in Castlevania: Curse of Darkness. He's a Level 4 Innocent Devil and can learn Grand Wave and Bone Storm. He can be obtained by evolving a Speed Mail devil by collecting 90 Sword, Spear or Knuckle Evo Crystals.

This final evolution of the Battle-Type Innocent Devil not only boasts a fearsome appearance, but is also very useful in combat. His behavior is very aggressive against foes and he constantly performs combos which have a considerable good range. Added to that, he randomly (although rarely) executes a special attack which leaves an opponent stunned and unable to move for several seconds. The Grand Wave is good for clearing closely-packed enemies in a straight line. His unique ability, Bone Storm, also deals continuous damage to enemies right in front of him in a straight direction. The best part is that this attack staggers weaker enemies, rendering them immobile during the duration of the spell. Corpsey also has improved Heart and Defense growth rates upon leveling up, compared to his softer Rasetz counterpart. All these traits make Corpsey one of the best Innocent Devils Hector can get in the game.

Retrieved from "https://castlevania.fandom.com/wiki/Corpsey?oldid=215875"
Community content is available under CC-BY-SA unless otherwise noted.