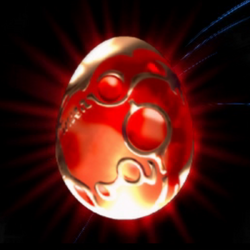 The Crimson Stone (深紅の石, Shinku no ishi?) is one of the two greatest treasures of the vampires, the other being the Ebony Stone. It traps the soul of a powerful vampire and uses it to give its owner an immense amount of power. Unfortunately, it also bears the curse of the vampire, meaning that whoever possesses it will turn into a vampire as well, losing all humanity in the process. The Crimson Stone was believed to have been lost a long time ago, along with the Ebony Stone.

As it turned out, Mathias Cronqvist was in the midst of re-creating the gem. He then had Death absorb Walter Bernhard's soul (after Leon Belmont defeated him) into the stone, thereby completing it. In doing so, he achieved his ultimate goal: to gain eternal life.

The Crimson Stone is a reference to the rubedo (Latin for "redness"), a term that was adopted by alchemists to define the fourth and final major stage in their magnum opus. Both gold and the philosopher's stone were associated with the color red, as rubedo signaled alchemical success and the end of a great work. It represents transcendence, perfection, immortality and incorruptibility. All these associations take on a very sinister double meaning with regard to what the Crimson Stone truly does in Castlevania: Lament of Innocence.

The Crimson Stone was obtained by Mathias Cronqvist. His scheme was to use it to obtain eternal life and defy God for the death of his wife Elisabetha. When Leon defeated Walter, Death immediately took Walter's soul and trapped it inside the stone, thus making it complete, granting Mathias eternal life and the curse of the vampire. He became the Lord of Darkness and the Crimson Stone has remained in his control ever since.

The idea of a special gem which provides Dracula with supreme powers was probably conceived since some of his very first depictions in public cinema, namely those performed by Béla Lugosi in the 1930s and 1940s, and by Christopher Lee in the 1950s, '60s and '70s. In many of these films, Dracula was portrayed wearing a necklace with a big sun-like medallion. It was common to see him hold this trinket in scenes where he was trying to bring someone under his control or while commanding the creatures of the night to do his bidding. This necklace became then a staple in many of Dracula's portrayals and he could be seen wearing it in diverse forms of media.

The medallion was originally a big radiant sun with six stars around it and a half-sun/half-moon effigy in its center; this image was later replaced by the engraving of a dragon in later films. However, as time passed by, common folklore gradually replaced this image with a red gem mounted on the medallion, which was now more in the shape of a star, and it is this way how it can be seen today in most forms of media and merchandise.

Before the Crimson Stone became canon in the Castlevania series, the mediatic influence of this iconic item could already be seen in many artworks for earlier games. In some depictions, the pendant is instead replaced by the brooch used to fasten Dracula's cape, which holds the Crimson Stone (or a similar gem) in it. Other times, Dracula is seen wearing an elaborated Victorian white tie around his neck, which covers most of his chest and where the Crimson Stone can barely be seen. This apparel also became somewhat of a staple in the way Dracula is depicted and it can be seen in many artworks for different games, sometimes even instead of the pendant itself. If the Crimson Stone is in fact hidden behind the tie in portrayals where it cannot be seen, is left to speculation.

Perhaps at some point, and seeing how this gem had been a recurring feature in many of Dracula's portrayals, the developers eventually decided to include it as a major plot element in Castlevania's lore by giving it a well-defined origin, as well as determining the kind of power it yields and the process on how it was able to accumulate all that energy, and also making its creation a pivotal event which helped push forward the history of confrontations between the Dracula and the Belmont Clan. 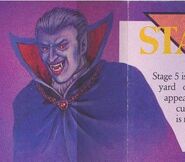 Dracula from Rondo of Blood

Dracula from Symphony of the Night 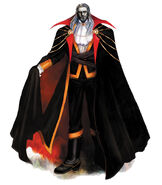 Dracula from Circle of the Moon

Mathias Cronqvist from Lament of Innocence

Dracula from Order of Shadows

Dracula from Pachinko
Add a photo to this gallery

Retrieved from "https://castlevania.fandom.com/wiki/Crimson_Stone?oldid=290733"
Community content is available under CC-BY-SA unless otherwise noted.