The Crissaegrim (クリセグリム, Kurisegurimu?) is the sword used by Alucard in Castlevania: Lords of Shadow 2. He wields the blade as a playable character in the Revelations DLC.

Using the tip of the Vampire Killer, left by his father in Carmilla's heart, and the remains of two other swords, Alucard forged Crissaegrim. An extremely lethal weapon molded in the likeness of its owner, retaining all of the power of the originals in its alloy. From the Vampire Killer, it retains the ability to punish its peers, paralyzing them in a state of infinite agony. From Glaciem and Igneas, the elemental swords for the underworld, it inherits the icy ability to absorb life and the burning intensity of flames capable of melting any armor. When the cold hands of its bearer so require, the broadsword unleashes all of the energy of these weapons, enabling it to give new meaning in the act of severing limbs.

After defeating his father Dracula with the help of his son Simon Belmont, Alucard returned to his old tomb. There, he discovered the stake attachment that came from his father's old weapon, the Vampire Killer, broken off in the fight against Carmilla. Alucard escaped the castle as it crumbled to ruin and began plotting to create a weapon to match the rest of the stake.

Alucard would later forge his powerful sword, the Crissaegrim, from the stake attachment and the remains of two other powerful swords: a cursed rapier called Glaciem that simultaneously freezes its enemies and heals the wielder, and the demonic flame blade Igneas, a sword that carves into armor and turns those cut with it into ashes.

Five hundred years later, Alucard confronted his father while armed with the Crissaegrim. Although the weapon wasn't powerful enough to kill Dracula, it was able to seal him away in a death-like state. The sword was used to stab Dracula through the chest and seal him away following the failure of the assault on Bernhard Castle by the Brotherhood of Light and its Paladin, as part of a plot envisioned by Alucard and agreed upon by Dracula to defeat Zobek and Satan once and for all.

Another five hundred years later, in modern times, Alucard reclaimed the weapon to reawaken his father and then used it to go to war with the castle's avatar to reclaim the Chaos Claws and Void Sword, and place them in reach of their master. After the death of Zobek's Lieutenant at his hand, Alucard donned his armor to disguise himself as his adversary and appeared to forego his use of the weapon in favor of the Masamune to make his ruse more convincing, although he likely still has it.

Since it was forged from three different and very powerful weapons, the Crissaegrim stands out as one of the most powerful weapons in the Lords of Shadow continuity. The stake of the Vampire Killer used in its forging allows Alucard to seal his father and presumably other beings of his caliber into deep sleeps that can last until the sword is removed, and leaves them without complete memory and their power fractured, although it's not powerful enough to truly strike down Dracula, as it was only made from a piece of the true Vampire Killer.

The Glaciem fragments forged into the blade give icy properties to the blade and Alucard's own attacks, allowing him to not only temporarily freeze his enemies, but drain their life force much like his father's Void Power, although it sacrifices striking power for enhanced speed.

The Igneas fragments used in the blade's forging embody it with powerful flames that enhance the sword's striking power, allowing it to shatter or overheat armor, while imbuing flames into Alucard's attack, although these bonuses are weighed down by the fact the blade becomes much heavier and slower.

Alucard can summon and dispel the blade at will, storing it away so it won't impede his travels, and call it at a moment's notice when needed for battle. 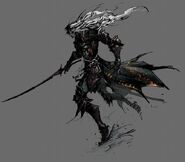 Retrieved from "https://castlevania.fandom.com/wiki/Crissaegrim_(Lords_of_Shadow)?oldid=288095"
Community content is available under CC-BY-SA unless otherwise noted.