The Cursed Village is the first area that Simon explores in Castlevania: Lords of Shadow - Mirror of Fate, as well as the first overall area in the game. This area is probably Simon's former home after it was attacked by Dracula's forces 30 years ago. The villagers have been experiencing zombification from the cemetery or a graveyard from another location; a nearby scroll explains that the tombstones had been moving, meaning the dead were returning to the world of the living. 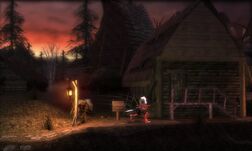 Retrieved from "https://castlevania.fandom.com/wiki/Cursed_Village?oldid=274587"
Community content is available under CC-BY-SA unless otherwise noted.