The Cyclops is a recurrent enemy in the Castlevania series, often acting as an area boss. It is a huge one-eyed giant. Slow, but few can compare for raw power. Fires a beam from its mono-eye.

In Greek mythology, the cyclopes were an ancient race of giants - the name literally meaning "round-eyed" or "circle-eyed". They were described as the sons of Uranus and Gaia, brothers of the Titans, builders and craftsmen. They were giants with a single eye in the middle of their foreheads, being strong and stubborn and with a foul disposition. They were often pictured at their forges.

The epic poet Homer described them as mortal herdsmen, sons of Poseidon, with Polyphemus being the most well known cyclops in history. In a famous episode of the Odyssey, Polyphemus traps the hero Odysseus and his men in his cave after they entered to stock on provisions. He eats two of them alive that night and two more the next morning. Odysseus manages to get him drunken sleep and blinds him by plunging a giant wooden pole in his only eye. The next morning, as Polyphemus opens the cave's entrance to let his sheep graze, Odysseus and the rest of his men manage to escape by tying themselves to the animals' undersides.

Making his first appearance in the series, the Cyclops can be encountered for the first time in the Forest of Darkness, keeping Sypha Belnades in a stone statue form. He is only vulnerable on the head.

At first glance, it may appear that the Cyclops never really tries to attack the player and simply makes round trips without taking their presence into account. However, he may attempt to crush them with his hammer if they get too close. He can also charge at the player if they are far enough. A good way to easily beat him is to use the Cross sub-weapon with the Double or Triple Shot, so that each weapon thrown can strike the head twice, once on its way out and another while returning.

The exists a secret trick that allows to severely damage the Cyclops: If the player is controlling Trevor and has brought the Dagger sub-weapon, they may instead climb on either of the two elevated platforms in the room and start jumping and throwing daggers toward the center of the screen; if the weapon is struck by lightning as it passes over the Cyclops, it will act as a conductor and unleash a giant bolt of electricity straight down that will take away one quarter of his HP bar.[1]

Only present in a hidden area of Stage 4, the Cyclops only does his work in the background, offloading boulders (complete with their riding Flea Men) from a lifting mechanism and placing them on their way to the adjacent room, where they'll roll down a series of stairs. He can neither be touched nor deal any damage, and is only there for ambience.

He wields a massive metal mallet and is much more agile this time around. He retains his dashing attack, but unlike his Dracula's Curse counterpart, he's much faster now and can make it all across the room in one swift move. Fortunately, this move can be completely avoided just by standing on either of the two elevated platforms located in the room.

Two variants of cyclopes appear in this game, a blue-skinned one, appropriately called Cyclops, and a red-skinned one, known as the Red Ogre. Both are introduced in a miniboss fight near the end of the Ghostly Theatre, where both monsters must be fought at the same time before reaching the theater's stage, where the main boss battle takes place.

While the Cyclops may look menacing at first, he's not very aggressive and only has a few attacks at his disposal, which include a single swing with his club and shooting a series of rays from his eye to the ground in front of him, which after a moment produce explosions. His special attack consists on him dragging his club along the ground in a spinning motion, which he ends by quickly swinging the opposite way. It is at this point when he opens his stealing window.

While at first glance the Red Ogre may seem just like a different colored variant of the Cyclops, he is in fact one of the most powerful enemies in the game and features much stronger versions of the same attacks, as well as a few dangerous moves of his own.

Unlike the Cyclops, he always swings his club twice. When he shoots his eye ray, it instead traces an irregular line along the ground in front of him, which activates a few seconds later; if the player is caught by this attack, they'll turn to stone and become open to attack by any surrounding enemies until they manually break free from that state.

Among his new moves is a charge, where the Ogre suddenly starts rushing at the player at great speed, inflicting great damage and knocking them to the ground if he manages to run them over. Another attack –and probably one of the most dangerous in the entire game– is his grab; the Ogre will suddenly stop and slowly start raising his arm, then he will quickly grab the player if they happen to be standing in front of him. Once grabbed, the Ogre will lift the player in the air by the neck and start strangling them, taking small chunks of HP with each hit, which all in conjunction add for a very damaging attack.

His special attack consists in a quick leap where he grabs his club and pounds the ground sitting on it, producing a small shockwave. This is also the moment when he opens his stealing window. This is a very difficult enemy to steal from, mainly because of the very brief moment he telegraphs the move, as well as the player requiring to evade the attack at the same time they're trying to steal. The item that can be stolen from him is the Galtite; while probably not very useful during weapon combining (that is, unless one's seeking to eventually forge the Gatling Gun), only two units are required in total to complete the combining list. 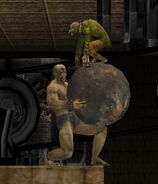 Retrieved from "https://castlevania.fandom.com/wiki/Cyclops?oldid=288590"
Community content is available under CC-BY-SA unless otherwise noted.