"Tell me – do you like being a creature of the night?"
— The Daemon Lord to Alucard

The Daemon Lord is a boss in Castlevania: Lords of Shadow - Mirror of Fate. He appears in the plots for Gabriel, Alucard and Trevor.

After being defeated for the first time, the Daemon Lord is modified by the Toy Maker and is known as Daemon Lord Resurrected.

Before Mirror of Fate

Events of Mirror of Fate

During Trevor's journey through the castle, a group of witches, seeking a way to defeat Gabriel and claim power for their own, and knowing the Daemon Lord's history with Gabriel, perform a ritual with the device in which the Daemon Lord was trapped, freeing it. The Daemon Lord immediately departs in search of Gabriel, though Trevor stops him, attacking him. The Daemon Lord smells Trevor, and remarks that his blood smells the same as Gabriel. He attacks Trevor, but Trevor manages to defeat it, cutting off its hands and slicing it in half. Trevor walks away, as the Toy Maker watches on, laughing.

The Daemon Lord's remains were assembled and brought back to life by the Toy Maker, as a half-mechanical creature, sent out to collect materials for the Toy Maker's experiments most notably living humans for the Macabre Puppets. It encounters Alucard, and, recognizing him as the same one who had killed it, attacks him. It defeats Alucard, burning him in the sunlight and tossing him off of the castle, though Alucard manages to survive, as the Daemon Lord expected.

Alucard later makes his way up to the Resurrection Room and is confronted by the Daemon Lord again, who uses the chamber's beams and electricity against Alucard. In a final desperate attempt to kill Alucard after he destroys the energy generators, the Daemon Lord drags him into a bottomless pit, but Alucard is able to save himself by feasting upon the Daemon Lord and acquiring the Demonic Wings in the process.

Near the beginning of the second act, the Daemon Lord will encounter Alucard in the belfry, serving as a mid-boss. He mainly attacks by performing claw swipes or a backflip drop slam, all of which can be either dodged or blocked. Once the Daemon Lord has lost about one third of his health, he will fire a lighting beam at Alucard and instantly defeat him as part of a scripted event, with no possible way to avoid it.

Later on in the game, the Daemon Lord will reappear in the Resurrection Room, where he is fought as the campaign's main fifth boss. He retains his claw swipes and body slams, although he also gains a new set of moves. He will try to bite Alucard at point-blank range and will also attempt to stomp him with his claw-like tail if he is behind. He can also slam his tail to produce a shock wave (this can be blocked) or fire a green colored energy laser in two possible ways: fires straight in front of him (like he previously did, only this time it can be dodged by using the grind rails on the top), or fires up toward the ceiling, bringing it down in a counterclockwise motion (the player can avoid the laser swipe by moving away from it).

After losing some of his health, the Daemon Lord will fly up to a chamber with two handles that can unleash lighting lasers at Alucard. On both the left and right side of the arena, there are generators that Alucard can destroy to take out one of the handles controlled by the Daemon Lord; when one of them is destroyed, the boss will come down and make another shock wave, and the battle will then continue (Alucard can avoid the beams by using the grind rails).

After Alucard depletes nearly one-third of the Daemon Lord's health, the boss will fly up to the chamber and unleash a single lighting laser. After Alucard destroys the second generator, the Daemon Lord will grab him and attempt to kill him by putting him in a generator to electrify him, although it will fail and the rest of the battle will continue in the chamber until all of the boss's health has been depleted. 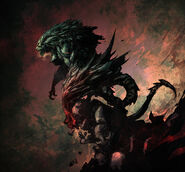 Retrieved from "https://castlevania.fandom.com/wiki/Daemon_Lord?oldid=261053"
Community content is available under CC-BY-SA unless otherwise noted.