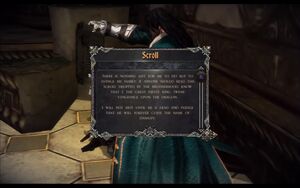 Danasty was the name of one of the world's great families. One such Danasty was a great pirate king and member of the Brotherhood of Light. He swore vengeance on the Dragon, Dracula, for the death of his family. Unfortunately he was killed in the Clock Tower.

Retrieved from "https://castlevania.fandom.com/wiki/Danasty_(Lords_of_Shadow)?oldid=304895"
Community content is available under CC-BY-SA unless otherwise noted.