For the Curse of Darkness material, see Dark Crystal.

Dark Crystals are sub-weapons used by Gabriel Belmont. The crystals are pure Shadow Magic, they are a natural phenomenon that grow in areas with a high concentration of Shadow energy. Because the crystals are made of magic in itself, activating magic of any kind will not unlock additional abilities or effects. The crystal can be found either in shards (common) or as a whole crystal (rare) in the environment or from enemy drops. Four shards are needed to make a whole crystal.

Exactly how is unknown, but crushing one of these crystals will summon a powerful shadow demoness that will utterly devastate enemies. Due to the degree of power held within them, Gabriel can only carry one Dark Crystal at a time.

In the 21st century, Victor Belmont utilizes one of these to summon the Power Crystal Demon in an attempt to kill the now vampiric Gabriel known as Dracula, but the Vampire Lord manages to counter-attack, slaying the demoness and emerging victorious. 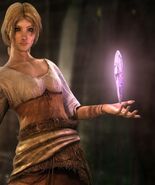 Claudia with a Dark Crystal

A Demoness that is summoned by breaking a Dark Crystal