The Dark Pain is a weapon similar to the Combat Cross and used by Alucard. It was created by the Toy Maker. When upgraded to the Improved Dark Pain, it allows the ability to be used on magnetic rails.

At some point after the events of Mirror of Fate, Alucard forges the enchanted sword Crissaegrim and uses it as his primary weapon, discarding the Dark Pain.

"The dark version of the combat cross used by the Brotherhood elite, created by the toy maker, brightest pupil of Gandolfi. This parody is the result of decades of research with a metal extracted directly from the Shadow plane. The weapon is extremely hard and perversely sharp and its full power is awakened only when wielded by a creature of the night." 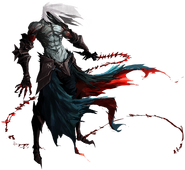 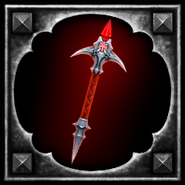 Guillotine
Add a photo to this gallery

Retrieved from "https://castlevania.fandom.com/wiki/Dark_Pain?oldid=295486"
Community content is available under CC-BY-SA unless otherwise noted.