The Dark Palace of Waterfalls (地下瀑布迷宮 –The labyrinth–, Chika Bakufu Meikyū?, lit. "Underground Labyrinth of Waterfalls") is a location in Castlevania: Lament of Innocence. The level is comprised of long underground tunnels where water flows beneath the castle and is well-known for its multiple paths and puzzles which makes its traverse very confusing and with great amounts of backtracking.

This stage is well-known for its bewildering puzzles and multiple paths that may make players get lost several times while trying to find an exit. It is comprised by long tunnels dug beneath Walter's castle, where water is supplied to the rest of the areas by an underground river that disembogues into several waterfalls further below. The tunnels connect to various separate halls where numerous groups of enemies await ready to ambush prey.

Both Fish Men and Mermen are the most common enemies in this area, although there are rooms where large groups of Flea Men will attack the player in an onslaught without trenches.

The boss room is located at the southernmost point of the first floor. However, the bridge to access it has been lowered and its contraption is hidden elsewhere in the level. Additionally, the door to access the bridge area has been protected by Walter himself and now a strong water current impedes further progress.

One of the rooms in the level houses a very dangerous foe: the Doppelganger, a mysterious being which adopts the form of its prey before killing it and stealing its identity. It's also worth noting that the Frost Elemental can be found somewhere throughout the stage, which can be both bad or good news, as it's worth seeking her to obtain the Whip of Ice. This whip in particular is worth fighting for, as the boss of this level is weak to this element (as well as a latter optional boss).

The boss of this area is a vampire who goes by the name of Joachim Armster. He is mortal enemies with Walter, although the latter was ultimately victorious over him a long time ago and confined him away in a secluded cavernous cell for what he thought would be the rest of eternity, with strong currents flowing around its walls. Water is like acid to a vampire and any attempt from Joachim to escape would surely result in ultimate death.

However, Joachim, once rescued from what appeared to be eternal damnation, doesn't show any kind of gratitude to Leon, his savior, and instead attacks him at the first opportunity, dismissing him as just another worthless human and with the intention of exacting revenge from the one who imprisoned him in the first place. It's worth noting that it is at this moment when Leon first senses the "night" flowing through Joachim's nature as soon as they meet, a trait that seems inherited to all descendants of the House of Belmont.

Essentially, all the player needs to do to reach the boss of this stage, is to activate the bridge's rising mechanism to lift the two pieces of the bridge, making a pathway to the boss's room, and press the waterflow switch to remove the flowing stream blocking the door that gives access to this bridge.

Note: The frozen door can only be opened with the Whip of Flames. The Lizard Men's fire breath won't melt the ice.

Note: Don't enter the second "skull tunnel" just yet (the one in the room with the HP Max Up and located midway toward the Frost Elemental's boss room). We'll backtrack and use it after defeating the boss of this stage, Joachim.

Note: This is the only room with swinging blades that has treasures in it. It should be the third one you encounter if you have been following this walkthrough.

Note: It's better to leave this "skull tunnel" for later. If you had used it before, chances are you would have ended up pressing the waterflow switch first, blocking the door to the room with the stairs connecting both floors and forcing you to do some serious backtracking to reach the bridge's switch. 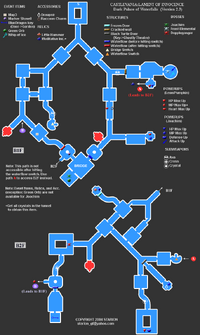 Retrieved from "https://castlevania.fandom.com/wiki/Dark_Palace_of_Waterfalls?oldid=284712"
Community content is available under CC-BY-SA unless otherwise noted.