For the Guardian Soul that performs short dashes, see Dashing. 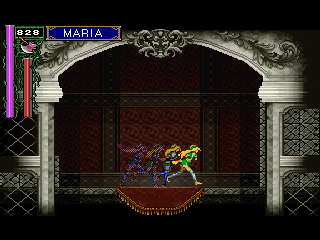 Dash is the ability to move in a quick burst of speed or to gain a faster walking speed. It has a few varieties:

Allows the player to move quickly backward in a short burst, used for enemy evasion or faster map travel. It was first available for Alucard in Castlevania: Symphony of the Night, and present since in many other games in the series.

A dash ability that increases the character's speed into a run by double-tapping and then holding a directional button. It was first featured for Richter Belmont in Symphony of the Night. Alucard in the Symphony of the Night's Saturn version can sprint after finding the God Speed Shoes (神速の靴, Shinsoku no Kutsu?) relic. Nathan Graves is able to sprint in Circle of the Moon after getting the Dash Boots magical item. Gabriel Belmont is able to sprint for a limited amount of time with the Cyclone Boots in Lords of Shadow and perform it naturally in Lords of Shadow 2. Trevor Belmont gains the ability after obtaining the Speed Boots in Mirror of Fate.

Allows the player to greatly increase their running speed, generating an energy aura around them which deals minimum damage. This ability is usually obtained near the end of the game and provides the player with a fast option for backtracking and completing map coverage.

Allows the player to move in a quick burst of speed depending on the button pressed, regardless of the player's facing direction. Natively, Juste Belmont and Maxim Kischine in have this type of dash in Harmony of Dissonance. Maria Renard is able to shoulder dash in Dracula X Chronicles. She is also able to dash in midair.

One of Julius Belmont's moves in Aria and Dawn of Sorrow. It behaves differently than the standard dash as is adds temporary invincibility, thus allowing him to pass some obstacles unharmed.

The Tackle allows a player to lunge forward in a quick burst of speed while dealing damage to anything in their path. Richter Belmont can natively perform this move in Symphony of the Night and Harmony of Despair by entering a special key sequence. He races forward (defying gravity if in the air), damages any enemy he passes through, and takes no damage for touching them. Nathan Graves gains this ability by acquiring the Tackle magical item, which allows him to break certain stone blocks within the castle to access new areas. Gabriel Belmont can perform this move when he's granted the Shoulder Charge skill in Lords of Shadow. In most cases, due to both its slow buildup and recovery times, this move is not very efficient for quick map coverage.

Nathan using the Dash Boots in Circle of the Moon

Maria's Dash in the Saturn version of Symphony of the Night

Dash (backward)
Add a photo to this gallery
Retrieved from "https://castlevania.fandom.com/wiki/Dash?oldid=295874"
Community content is available under CC-BY-SA unless otherwise noted.