David is well known for his fans as Senketsu in Kill la Kill, Jin Kisaragi in the BlazBlue series and Archer / Gilgamesh in Fate/Zero; as well as Li Xingke in Code Geass, Marshall Law in the Tekken series, Grimmjow Jeagerjaquez, and Kouga Kuchiki in Bleach. He was nominated Best Voice Actor in an Anime by the American Anime Awards for his work in Gun X Sword. 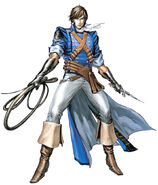 Retrieved from "https://castlevania.fandom.com/wiki/David_Vincent?oldid=228962"
Community content is available under CC-BY-SA unless otherwise noted.