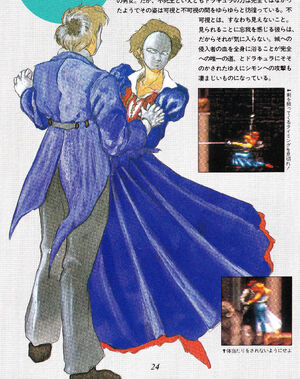 Dead Nobles are enemies in the Castlevania series. These aristocrats, which can be either ghosts or undead corpses, can float about, disappear and reappear, dance together, and even fence.

A host of dead nobles appeared in Super Castlevania IV in the elegant halls of the castle. The dead nobleman floats toward Simon in a horizontal line and may disappear, only to reappear from the other direction and make another pass at him. The dead noblewoman will move about in a circular pattern in the air, often staying out of reach of the whip, and then swoop down for an attack. In a later section, these ghosts are found dancing together, they spin around each other while moving up and down and back and forth through the floors and walls. At the end of the stage is a boss version of these dancers, dubbed the Dancing Spectres, and in English called Paula Abghoul and Fred Askare. These periodically charge toward Simon, each wielding a rapier, one pointing forward and the other upward.

The dancing version of these ghosts reappeared in many games, called Ghost Dancers, starting with Aria of Sorrow. Rapier-wielding male nobles (without their dancing partners) reappeared in Curse of Darkness, called the Dead Fencer, Dead Baron and Duke Mirage.

Dead Fencer's concept art from Curse of Darkness
Add a photo to this gallery
Retrieved from "https://castlevania.fandom.com/wiki/Dead_Nobles?oldid=287955"
Community content is available under CC-BY-SA unless otherwise noted.