For the soul and its effects, see Deathscythe.

Dawn of Sorrow
Curse of Darkness
Harmony of Despair

Death's Scythe, also referred to as Death's Sickle, is Death's main weapon and a usable weapon in multiple games. The weapon is always the most (or in one case the second most) powerful weapon in terms of attack strength in the games in which it appears.

Death's Sickle is the most powerful weapon in Aria of Sorrow, giving the highest boost to raw Attack power. It also possesses the longest reach of all melee weapons. However, the weapon's sheer power is impractical, due to the fact that the weapon deals Dark damage, which most enemies are resistant to, and the slow attack speed of the weapon, leaving the player vulnerable, both attributes of which make the weapon only useful against a handful of enemies and less useful than the Light-attribute Claimh Solais. It appears in the top right corner of the room outside of Death's room, only in Hard Mode, and it cannot be reached until the player obtains the Giant Bat soul. The weapon resembles a one-bladed version of Death's own bone scythe.

Death's Scythe returns in Dawn of Sorrow and retains its status as the most powerful weapon in the game. While it also keeps its dark attribute, it gives an even higher attack power boost, making it more useful than originally. The scythe's design differs from its appearance in Aria of Sorrow, to fit its wooden-metal appearance. The scythe can only be obtained through Yoko's shop by combining the Death soul with the Golden Axe. Its Critical Attack releases the skulls that Death uses in his boss fight, which is the second most powerful attack in the game, following the fully-charged Skull Archer soul's arrow.

Death's Scythe is Dark-based, (inserted in the two-handed axe class) and offers +120 Attack, making it the most powerful weapon in the game; however, it often proves to be only half as effective against a large portion of monsters, since many of the enemies posses a tolerance to Darkness.

Like several of the weapons in Curse of Darkness, Death's Scythe has its own unique attack. If Hector uses four standard attacks and then a finisher, Hector will spin Death's Scythe and release a large number of smaller sickles. These sickles will home in on targets, similar to the sickles that Death releases in a wide number of Castlevania titles.

The D-scythe (likely an abbreviation of Death's Scythe) makes a cameo appearance as a weapon in the turn-based strategy game Vandal Hearts II, also by Konami.

Death's Scythe appears as an item that can be used by the many playable characters in the game. If an enemy is damaged enough, they will emit a dark aura and can be instantly K.O.'ed when struck by the scythe.

The design of the scythe is based off its appearance from Castlevania: Lament of Innocence. 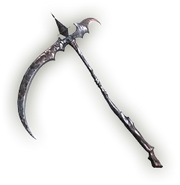 Death's Scythe as it appears in Ultimate.
Add a photo to this gallery

Death Scythe model sheet from the Castlevania animated series.
Add a photo to this gallery

Death's Sickle from Aria of Sorrow.

Death's Scythe from Dawn of Sorrow.

Death's Scythe from Curse of Darkness.

Death's Scythe (combo 4).
Add a photo to this gallery
Retrieved from "https://castlevania.fandom.com/wiki/Death%27s_Scythe?oldid=323266"
Community content is available under CC-BY-SA unless otherwise noted.