For other uses, see Death (disambiguation).

Death is a character in the Castlevania animated series. An eternal entity also known as the Grim Reaper, Death seeks to bring Dracula back from the dead. He tricks Saint Germain in doing so by disguising himself as Varney and the Alchemist.

In the English version of the show, both Death and Varney incarnations of the character were voiced by Malcolm McDowell, while the Alchemist was voiced by Christine Adams.

According to Trevor Belmont, Death is an elemental spirit who feeds on living beings' essences, also called life energy, at the exact moment after death.

Roughly 100 years ago, it disguised itself as Varney, a vampire from London, and joined Dracula's court. After Dracula began his assault on humanity, he sent Varney to eliminate the humans in Targoviste, despite the city already being destroyed by his night creatures.

After Saint Germain becomes trapped in the Infinite Corridor, Death takes the form of an Alchemist and meets him inside. As the Alchemist, Death tells Saint Germain that the only way he can control the corridor and find his loved one is by giving up something of value. When Germain states that he has already given things up, the Alchemist corrects him, stating that there is a difference between giving things up willingly and having them taken, and convinces him that he would have to give up his morals if he wants to a achieve the highest level of alchemy and control the Infinite Corridor. The Alchemist then returns Saint Germain to Earth.

Again taking the role of Varney, Death begins acting as a benefactor for both Saint Germain and Hector, giving both of them the tools and information needed for their goals. He, along with Ratko, attack Trevor and Sypha with night creatures, but the two are saved by Zamfir and the royal guard, and the vampires escape.

Varney then contacts Issac with a magic mirror, revealing that he believes that he has discovered a way to resurrect Dracula. However, Issac, having come to terms with Dracula's passing, holds no interest in the subject and ends their conversation.

Later on, when Ratko discovers the location of the underground base in Targoviste, Varney mocks him and the two get into an argument, but Ratko leaves before things become violent. The two then launch an assault on the underground base. As Ratko and the night creatures fight Trevor and Sypha, Varney proceeds to look around the base for a magic mirror. Finding the mirror hidden behind the corpses of the king and queen in the throne room, he sets the mirror to Dracula's castle before jumping through, right before Trevor and Sypha enter the room.

Appearing before Saint Germain, who is in the middle of casting death magic to bring Dracula and Lisa back from Hell, Varney reveals himself, not only as the Alchemist who convinced him to cast away his morals, but also as Death. Death reveals that his intent is to have Saint Germain bring back Dracula and Lisa in a single body as the Rebis. Dracula would constantly be haunted by the screams of his wife's soul, driving him further and further into madness. This madness would result in the resurrected vampire wreaking death upon the world unlike anything humanity has ever seen before, creating a feast for Death. Despite his misgivings, Saint Germain proceeds with the ritual successfully bringing back the husband and wife as the Rebis; however, before much more can be done, Alucard, Trevor and Sypha break through the barrier and kill the Rebis.

Angered that his attempt has failed, Death fights Trevor. Trevor is initially unable to injure Death and the entity beats him down. However; Trevor manages to get up and uses the morning star to produce a volley of projectile flames of titanic size to distract Death for a consider amount of time. Trevor then drops the morning star and dashes to get behind Death. All the while, he uses a special dagger and its three separated pieces that he had acquired in Targoviste and reassembled it, reactivating it's magical powers, to reenact a murder-suicide pact with God. Trevor then stabs Death in the head just as it looks behind itself after the flames subside, releasing that magical energy within the dagger and killing it or permanently destroying/banishing its physical form with one strike.

Consuming the essence of beings who die is not only Death's purpose since the beginning of the first life on Earth, but also his greatest pleasure; just as his hunger for souls and their life energy is his greatest pain. A hunger of the same nature as a vampire's thirst for blood. Death dreams of all life in the world dying so that he can eat his fill of souls along with their life energy, gain omnipotence, and never be hungry again.

Death has no moral limits, there is no act of cruelty or sadism that is beneath him. His desire to kill and consume all the souls of the world is a testament to his absolute selfishness and utter lack of empathy. Death's use of the Rebis is perhaps an even greater demonstration of Death's evil nature. Death has no sympathetic or empathetic features, he is the most evil and morally indifferent character in the series.

As Dracula carried out his attempted genocide, Death was the chief profiteer. Never before had Death eaten so well, nor been so close to his dream of consuming all life. When Dracula was killed, Death was enraged with humanity for ending the genocide and taking his "treasure" away. Death then worked tirelessly to revive Dracula as a Rebis, so that Dracula could murder the world and unwittingly feed all of life to Death.

Varney and Death are one and the same. Though the Varney persona is used to create a laughable character who can influence beneath suspicion, it is still a close parallel to Death's personality. Death is vainglorious, whether he is Varney, the Alchemist, or without disguise. Varney thinks highly of himself as a member of Dracula's court and as an ancient vampire in England. Most everyone who meets Varney, or smells him, have a less flattering opinion of him. Likewise "Death" speaks of himself as if he were the aspect of death itself; arrogantly exposing his immortality and omnipotence. In both personas, Death assumes he is greater than educated observers know he is, and as Varney, he intentionally tries to use more complicated words to appear more educated, something he admits to Saint Germain.

Another parallel between Death and Varney is their place in their respective environments. Both personas are parasites, taking from their environment while giving nothing back. Varney was just significant enough to be a part of Dracula's court and enjoy the plundering of Targoviste after Dracula destroyed the city. Death gives nothing to the world, only seeking to take all life from it. Though Death sees his pleasure for eating the life force of souls that just died as a God given purpose, Trevor Belmont presented an accurate and damning assessment of what Death is: "You're only an old killer, you don't make anything, you don't live. You just eat and hide."

Death is so powerful that Trevor accepted he wouldn't survive his battle with him. And yet, Death does have his limits. He cannot pull back the dead from Hell (he must rely on humans to do so) and is frustrated to need inferior humans and vampires to enact his will on Earth. As much as he likes to frame himself as the eternal force of death, he is still a living, though partially spiritual, being that can be killed or have his physical form/presence destroyed and/or banished.

Death's statue in "Murder Wakes It Up". 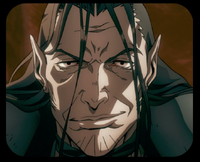 Varney and Ratko in the Season 4 trailer.

Varney in the Season 4 trailer.

The Alchemist in the Infinite Corridor.

Death in "The Endings". 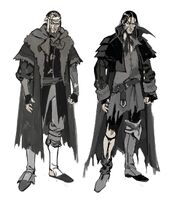 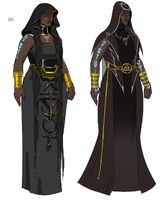 The glyphs on the Alchemist's arm.

The Alchemist's key to the Infinite Corridor.

Layout and key art for Season 4 Episode 1 by Sam Deats.