Castlevania Wiki
Register
Don't have an account?
Sign In
Advertisement
in: Abilities, Lords of Shadow 2 Items, Mirror of Fate Items 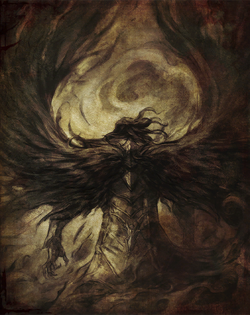 In Castlevania: Lords of Shadow - Mirror of Fate, Alucard gains the ability to use Demonic Wings after drinking the blood of the Daemon Lord. Despite looking aesthetically different from Dracula's Demonic Wings, they function the same way by allowing Alucard to double jump. It is unknown why Alucard does not possess this power by the events of Lords of Shadow 2, although a possible explanation is that Alucard's vampiric blood evolves his powers to suit his specific situation, similar to his Wolf Form.

Demonic Wings from Lords of Shadow 2