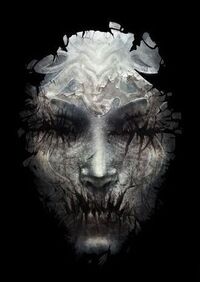 The Devil Mask is a counterpart to the God Mask in Castlevania: Lords of Shadow.

The Lord of the Dead wears this mask on his face. It is possible, although not implied, that the Devil Mask is the means by which Zobek was granted untold knowledge and power by Satan himself, as it would explain its effect on both him and Gabriel (Zobek used it on Gabriel in order to have him kill both his own wife, Marie, and his ally, Claudia).

At the end of the game, after Zobek had been burned alive while wearing the Devil Mask, it remains lying on the ground behind Gabriel as the credits roll, having been seemingly abandoned by its previous wearer, the first implication that Zobek is alive.

Retrieved from "https://castlevania.fandom.com/wiki/Devil_Mask?oldid=255042"
Community content is available under CC-BY-SA unless otherwise noted.