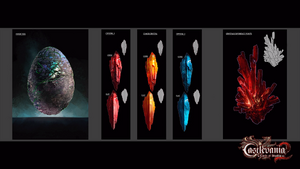 The Dodo Egg is a relic which Dracula obtains in Castlevania: Lords of Shadow 2.

It can be shattered to summon a small Dodo. The Dodo will then fly to an accessible secret near Dracula's location (usually, but not always, the nearest) and perch on or besides it. It will detect castle key holes, Pillars of Sacrifice and Pain Boxes, but cannot find City Memorials or Brotherhood Knight Scrolls. It cannot be released if a secret is actually visible on screen; a text popup will say Dracula cannot use it now if this is attempted. It also only finds secrets within the current map sector; if all have been found, it cannot be used.

Once it has been released, it will be indicated on the map by a red arrow if it's not near, and a red egg if it's within the visible range of the map. The icon will flash with increasing speed over time, and if Dracula does not find the bird, it will eventually die. It makes a distinctive call when near.

If Dracula does find the secret, the bird will explode in a puff of green gas when he activates it.

The Dodo Egg is based on the traditional enemy, Dodo Bird, found in several other Castlevania games.

Dodo Egg's Book of Dracul entry.
Add a photo to this gallery

Retrieved from "https://castlevania.fandom.com/wiki/Dodo_Egg?oldid=306879"
Community content is available under CC-BY-SA unless otherwise noted.