The Doppelganger is a recurrent boss in the Castlevania series. It is a demon that takes the form of another being, usually its victims. The idea of humans having doppelgänger comes from Egyptian mythology. It is said that if someone ever meets their doppelgänger, its intent is to murder them so it can take over their role in life.

The Doppelganger will form from Simon's reflection on a mirror and break out of it to attack. Again, it will attack relentlessly while moving toward the player. The Doppelganger is equipped with the same whip (Mysterious Whip, Chain Whip, or Morning Star Whip) and sub-weapon (Dagger, Holy Water, Axe, Boomerang, but not the Pocket Watch or Herb) the player has equipped at the moment. When it uses a sub-weapon, the player's heart supply decreases by one. Upon defeat, the Doppelganger will vomit a barrage of mirror shards while struggling for its life.

Additionally, both Dopplegangers have a very limited artificial intelligence that can be exploited. Just running toward one, jumping and then attacking in midair will make the Doppleganger to also jump, take the hit and get knocked back, allowing the player to repeat the process until it is defeated.

The Stopwatch can also make these fights trivial, as using it completely freezes the Doppleganger, leaving him at the mercy of Alucard's attacks, as it won't have invulnerability upon taking damage. On the other hand, the player should avoid using the stopwatch right after hitting the Doppleganger; if they do, it will be stuck in its invulnerability state for the duration of the effect.

The Doppleganger is also vulnerable to the Curse status effect. In the first fight, hitting him with the Red Rust (which is obtained near the beginning of the game) will prevent him from attacking with anything but his knife sub-weapon.

While the player does not physically fight the Doppelganger in this game, Soma Cruz can obtain the Doppelganger's soul in the Garden of Madness. This soul allows him to switch quickly between two sets of equipment, gear and souls.

A doppelganger also appears during a cutscene that takes place in the center of the castle, where it takes the form of Mina Hakuba. In a gambit to turn Soma into the next Dark Lord, Celia Fortner kills this doppelganger, enraging Soma and almost letting himself turn, although Genya Arikado arrives just in time to inform him of the truth. Shortly afterward, the soul of Dmitrii Blinov escapes Soma's body and inhabits the body of the slain doppelganger, using it to revive himself.

He fights exactly as Trevor did in the main game, although he's differentiated from the real Trevor by his pale blue hue and weakness to Light. Additionally, during the first fight, his health must be depleted entirely, rather than one-fourth depleted as in the first Trevor fight.

During the second encounter with the Doppelganger, it's also resistant to the Dark element.

The Doppelganger can be found in the deepest level of the Nest of Evil, acting as that area's final boss. The form this enemy takes for the battle is random, whether it is Jonathan or Charlotte (that is, the creature can appear as any of these two characters regardless of which character the player is currently controlling). Likewise, the Doppelganger will appear as any other protagonist character if playing on any of the game's many alternate modes.

A good tactic for starting the fight consists in casting 1,000 Blades immediately upon entering the room; doing so will inflict many hits, usually enough to send the Doppelganger into its recovery animation and maybe even slightly knock it back if the hits prove powerful enough. In contrast to other games, coming into contact with the Doppelganger will not deal any collision damage.

Being the last boss of the Nest of Evil, it is the only boss that produces a Magic Crystal upon defeat in the whole area.

Once the Doppelganger has been defeated in the Normal campaign, the player can enter the next room and claim the Greatest Five Dual Crush, the final and most powerful crush in the game.

When playing in Sisters Mode, Doppelgangers for both Stella and Loretta will be faced, who fight similarly to their boss battle in the Normal mode.

A cartoon-like image which appears before fighting the Doppelganger in Chronicles.

Doppleganger10's appearance in Symphony of the Night.

Doppleganger10's enemy list entry from The Dracula X Chronicles version of Symphony of the Night.

Doppleganger40's enemy list entry from The Dracula X Chronicles version of Symphony of the Night.

Mina's doppelganger from Dawn of Sorrow. 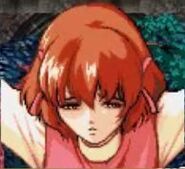 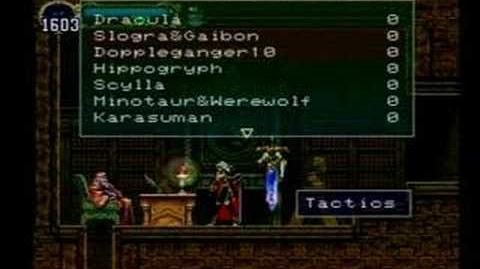 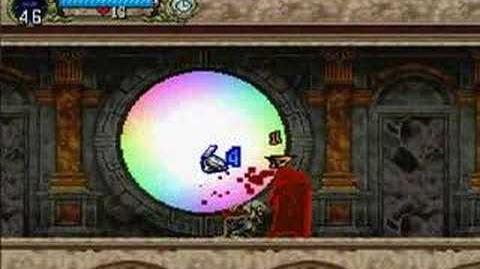