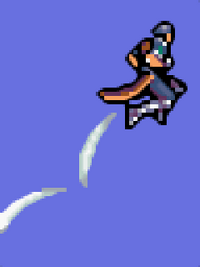 Double Jump is the ability to perform a second jump following an earlier jump. Characters who possess a triple jump, can jump again after a double jump. It's also possible for certain characters to obtain an infinite jump.

The double jump was first introduced in the 1993 NEC PC Engine game Castlevania: Rondo of Blood and only Maria was able to perform it; since then, it has been an ability which most characters can use in later Castlevania titles. This skill has been used to reach places previously inaccessible or for boss battles where the boss is either too big or too hard to dodge normally. It usually appears in the form of a relic or a soul.

The double jump ability is an innate power of most unlockable characters and several main characters:

In most games, once you find the relic needed for this ability, the user can also perform a jump kick in mid-air after the second jump. An exception to this rule is Soma in Aria of Sorrow, where he needs to obtain the Kicker Skeleton's soul to gain this ability.

Double magic item from Circle of the Moon.

Double Jump from Aria of Sorrow.

Stone of Flight relic from Portrait of Ruin.

Maria's Double Jump from The Dracula X Chronicles.
Add a photo to this gallery

Retrieved from "https://castlevania.fandom.com/wiki/Double_Jump?oldid=318793"
Community content is available under CC-BY-SA unless otherwise noted.