Dracula's Castle (ドラキュラ城, Dorakyura Jō?), also known as Demon Castle (悪魔城, Akumajō?) or Castlevania, is Count Dracula's lair and symbol of his magic.[1] It houses an army of his supernatural minions, and tends to collapse when Dracula is defeated. Yet, it is able to restore itself and reappears intact in later games, even the ones where Dracula has not yet revived himself.

The exact location of the castle is impossible to determine. Being an entity of chaos, it has the ability to reemerge in different places whenever it revives. Still, the vast majority of times it has reappeared was in Europe, in Transylvania.

If one takes into account the events from the original 1897 novel that inspired the series, as well as real historical landmarks where Vlad III Drăculea was known to inhabit, that may be indication that the castle from the series was at some point located somewhere in Transylvania or in northern Wallachia, where one of the voivode's real castles, Cetatea Poenari, is located.

Nevertheless, due to its supernatural nature as symbol of Dracula's magic and its ability to revive in different regions, the castle in the series cannot be considered the same as the historical landmarks. It does not exist in the earthly plane but is, in fact, a spiritual world atop another dimension.[2][3][4]

The appearance of the castle also varies; in artwork for the original Castlevania it appears to be on top of a mountain, while in Symphony of the Night it is located off the shore of a lake, and in Curse of Darkness it resides by the ocean (maybe the Black Sea).[citation needed] In Symphony of the Night, Maria Renard remarks the castle is different from how she remembers it (she had fought in it five years earlier during the events of Rondo of Blood). Alucard, who had probably once lived there, notes the castle is "a creature of chaos", hinting at the castle's origins and explaining its constantly changing nature.

It is possible the castle originally belonged to Walter Bernhard. His castle had the familiar strange keep structure present in Dracula's Castle. If this was the case, the castle dates back to at least the 11th Century. In 1094, the castle appeared more like a traditional medieval castle than the more elaborate Gothic architecture seen elsewhere. One factor in favor for Walter's castle being Castlevania is that, in Curse of Darkness, the abandoned castle is the place where only a Belmont's blood can gain access to the infinite corridor. Seeing as Leon Belmont was the first Belmont proclaimed at Walter's castle, the abandoned castle could be Walter's original castle.

A factor against the theory of Walter's castle becoming Castlevania is that at the end of Lament of Innocence, Mathias Cronqvist (Dracula) leaves the castle in the form of a bat and it is not known where he went, or if he ever returned. The Japanese instruction booklet for Castlevania: The Adventure outright states Dracula to have built his castle himself at the outskirts of Transylvania.[5] Koji Igarashi has also expressed that one of the reasons for the change of the franchise's Japanese title from "Akumajō Dracula" to "Castlevania" was due to there being no Dracula, nor his castle, on a given game, indicating that the castle seen in Lament of Innocence might indeed not be the same castle that Dracula uses later down the chronology.[6]

Following Dracula's defeat in 1999, the castle was sealed into an eclipse, and was visited by Soma Cruz in 2035. In 2036, Celia Fortner and her cult built a castle immensely similar to Dracula's to foster the growth of a new Dark Lord. As her plan was left in ruins, the castle completely collapses. The castle ultimately returned due to Olrox effectively taking over as the Dark Lord, until Death put an end to him.

Castlevania's interior constantly shifts between games, below are a few of the rooms that have appeared.

While the castle, or a replacement, has appeared in every game that conform the Castlevania series to date, this section focuses in those instances when the castle has appeared as its own named stage or area. 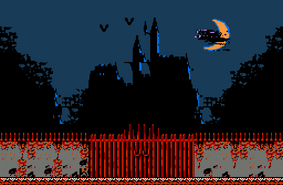 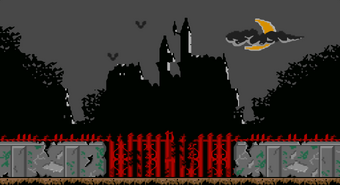 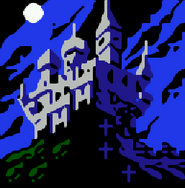 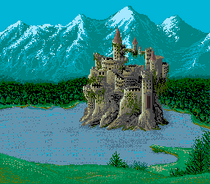 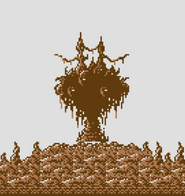 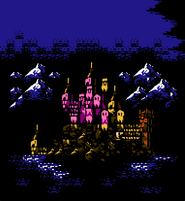 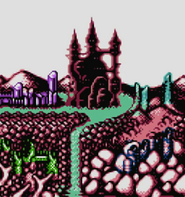 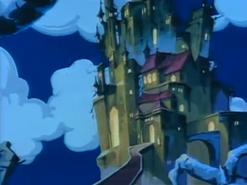 Castlevania from the Captain N episode "Return to Castlevania" 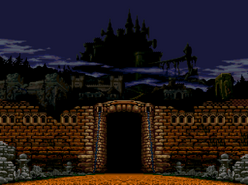 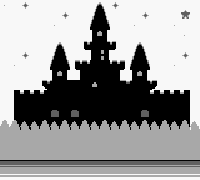 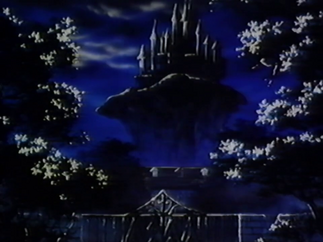 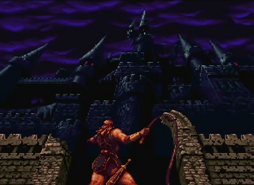 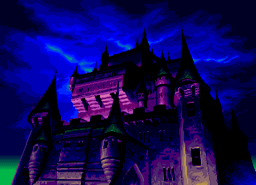 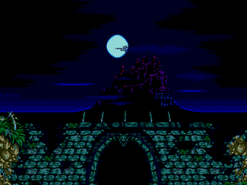 Ruins of the Castle Dracula from Castlevania: Bloodlines 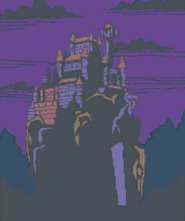 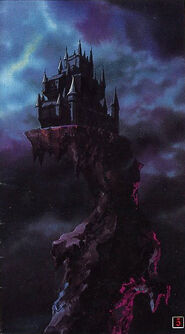 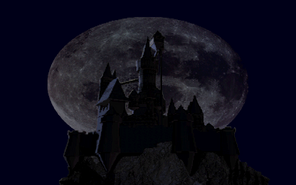 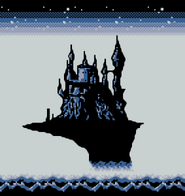 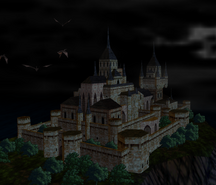 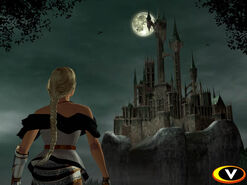 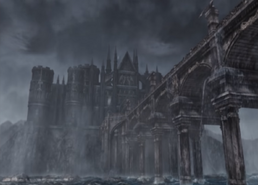 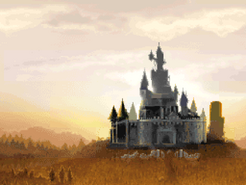 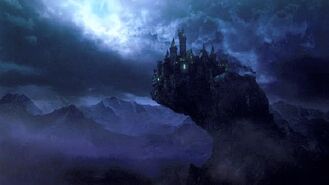 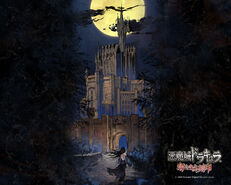 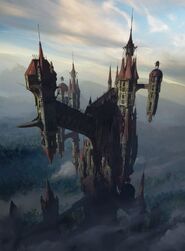 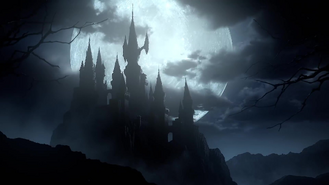 Super Smash Bros. Ultimate
Add a photo to this gallery 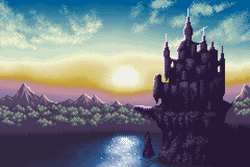 Camilla's castle from Circle of the Moon 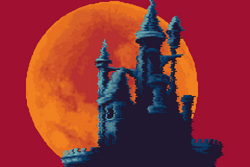 Maxim's castle from Harmony of Dissonance 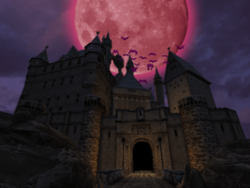 Walter's castle from Lament of Innocence 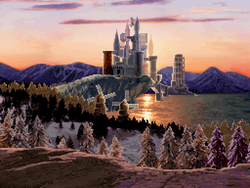 Castlevania was constructed sometime before 1455. Lisa of Lupu visited the castle in 1455 and became the student and wife of Dracula shortly after their first meeting. After Lisa was killed by the Church within Targoviste in 1475, Dracula returned to Castlevania to summon an army. He dueled with his son Alucard within the castle and then gathered an army of demons. In 1476, Dracula teleported Castlevania directly into the center of Targoviste. He unleashed his army of demons and destroyed the city in short order. Dracula's army was then deployed across the whole of Wallachia with the goal of exterminating all humanity.

Castlevania is the home of Vlad Dracula Tepes. It is strongly implied that the castle was built by Dracula himself. The castle is both a technological and supernatural marvel. From its exterior, the castle can be seen to incorporate electricity and advanced mechanics in its workings. The Belmont family has noted that it also uses steam power and electric powered lights. Not including technology that is centuries beyond what the outside world possesses, Castlevania is also operated with supernatural elements. Dracula's study is shown to have glass that reacts to his magical abilities. Also, the whole castle is capable of teleportation; a "traveling machine" as Dracula puts it. Dracula can make Castlevania teleport to any location. This teleportation can be done softly or in an explosion of fire, as was the case when he teleported the castle into Targoviste.

During peacetime, Castlevania is Dracula's home and laboratory. In wartime, it is a weapon of such danger and potency as to be legend. When Dracula attacked Targoviste, his castle's teleportation was like dropping a bomb on the city, destroying the city church instantly. Immediately afterward, Dracula released his army —which was housed inside the castle— directly into the city; completely ignoring any defenses Targoviste had.

Dracula's Castle is featured in Super Smash Bros. Ultimate as a playable stage. Renowned enemy characters from the Castlevania franchise such as Medusa, the Mummy, The Creature and Flea Man (Igor), Carmilla, the Werewolf, Death and even Dracula himself appear in the stage from time to time as background elements. The castle also acted as the main setting for the announcement trailer for Simon Belmont's inclusion to the game as a playable character, where he arrived at the castle to deal with Dracula, while Luigi, who had arrived at the castle before Simon for unknown reasons, was overwhelmed by the castle's unearthly inhabitants before being killed by Death. The full castle was seen after Luigi screamed at the sight of Carmilla's mask as he attempted to revive himself.

In the World of Light adventure mode, Dracula's Castle appears as an area in the World of Dark taking a form very similar to the original Castlevania. Within, the player must make use of cannons to dispel evil spirits and battle their way across the castle, ascending to the top, and defeat Dracula as part of the process to make Dharkon appear in the World of Dark's main hub. The characters Ridley, Daisy, Wario , Dark Pit, Robin, Ken and Richter can be recruited here.

Retrieved from "https://castlevania.fandom.com/wiki/Dracula%27s_Castle?oldid=249919"
Community content is available under CC-BY-SA unless otherwise noted.