Dracula Bomber is an antagonist character in Super Bomberman R. He was included on a free DLC update to the game released in November 15th 2017, along with Option Bomber A, Option Bomber B, Reiko Bomber, Shiori Fujisaki Bomber, Jehuty Bomber, Anubis Bomber, Princess Tomato Bomber, Bubble Head Bomber and Goemon Bomber.[1] He can be acquired in the in-game shop for 10 coins.

His design is inspired on Ayami Kojima's rendition of Dracula on Castlevania: Symphony of the Night.

"The Dark Lord Bomberman who presides over Planet Castlevania from his sinister living castle. An immortal vampire leading an army of darkness, the mere mention of his name strikes fear in the hearts of people everywhere. Even when defeated, he is never completely destroyed, and always rises once more, together with his castle. He and the Belmont Clan are eternal nemeses, locked in an ongoing battle through the ages."
— Super Bomberman R official website description

Dracula Bomber's unique Dark Curse ability enables him to set up to four invisible magic circles that deflect bombs placed on top of them and can be used to propel his own bombs forward. Once Dracula Bomber is defeated, all the circles placed by him are erased from the arena. Placing more than four circles causes the oldest ones to disappear.

Dracula Bomber is featured prominently on the Grand Prix mode preface cutscene as an evil bomberman leading other villains into an invasion of the Bomberman brothers' house. His attack is thwarted when Simon Belmont Bomber arrives with Vic Viper Bomber and Jehuty Bomber, and grants White Bomberman with a memory cartridge containing his Vampire Killer ability, enabling him to banish Dracula Bomber and his allies. 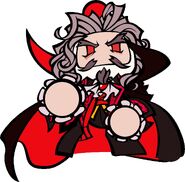 Retrieved from "https://castlevania.fandom.com/wiki/Dracula_Bomber?oldid=284216"
Community content is available under CC-BY-SA unless otherwise noted.