"Hear me out, Saint Germain-- what if I just killed you here, drank all your blood, and did your plan myself?"
— Dragan in "You Must Sacrifice"

Dragan (ドラガン, Doragan?) is a character in the Castlevania animated series.

He was voiced by Matthew Waterson in the English version of the show.

Dragan has a storied history, carrying out hundreds of ambushes and slaying thousands.

After Dracula's death and the deaths of his Generals, it seems like Dragan had managed to successfully take over leadership over their armies and courts. This is seen during his siege against Dracula's Castle and Alucard's village, where his vampire army was shown to wear Japanese, Indian and various European based armors and weapons. His army also consisted of the remnants of Dracula's own personal soldiers as well.

Dragan was also shown to have recruited at least four vampire witches/magicians into his armies services to create the body vessel for the Rebis, in order to assist in Saint Germain's plan.

As one of the mightiest vampire lords, Dragan is violent and prideful. He is driven to resurrect Dracula even if it means following the orders of Saint Germain. Like many vampires, he looks down on humans and would gladly kill them if they are not useful.

– Saint Germain: Oh, Dragan, feared Dragan, storied Dragan of a hundred ambushes and a thousand dead... yeah, you could absolutely kill me right here, but you cannot enact my plan, because you don't have the skills or the wit. (Saint Germain slaps Dragan) Shut up. You sound like a cow farting. Do you want your precious Dracula back or not?
– Dragan: Yes.
– Saint Germain: Then get back in your *** pram. You can't do this without me. Obey my instructions.
- Dragan: (growl) I will kill you.
- Saint Germain: Do as you're *** told! Drive them all towards Danesti. I'll do the rest. You can kill me afterwards.

Dragan and Saint Germain in "You Must Sacrifice".

Dragan fighting without his helmet. 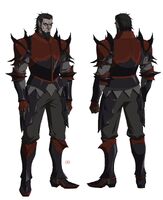 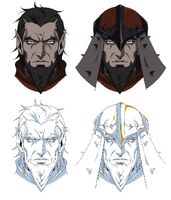