Circle of the Moon
Legends
Portrait of Ruin

The Dragon Zombie is a recurrent boss or powerful enemy in the Castlevania series. It lost its magic, but has become mindlessly violent.

The Dragon Zombie are the reanimated remains of a dragon. The Death Dragon from Castlevania Legends was slain by Count Dracula and left to guard his castle. The various Dragon Zombies' remains throughout the Castlevania games appear in varying amounts of decay, being full of flesh in Legends and Circle of the Moon, but more skeleton-like in Chronicles and Portrait of Ruin.

The boss of the second level. Simon passes the dragon's remains while trekking through the Underground Aqueduct. It returns at the end to attack while Simon is stuck on a small raft. The dragon remains hovering on the right side of the screen, attacking in two ways: either it will tip the boat with its tail, or breathe fire at Simon. It can be avoided by remaining on the left side of the raft and constantly attacking its head.

This dragon was actually killed by Dracula himself in his early years to send a message that he, as the "King of the Dragons", had arrived. Dracula granted it new life to be a part of his own army. The dragon is huge and only its front half is shown onscreen. Its fire-breathing ability is ever-present, but it chooses to spew individual flame blasts sporadically as it moves its head up and down between three possible positions to keep the player guessing while moving. Like other bosses its size, it likes to crash into things using its head to make debris fall from the ceiling to further disrupt Sonia's movements.

Dragon Zombies appear as a pair of boss monsters. Both dragons lie on the floor, with their bodies in an advanced level of decay, and are so bulky they must resort to attack using only their heads. The left dragon attacks by spewing a series of loosely aimed fireballs, while the right dragon attacks with aimed balls of electricity. Both dragons have the ability to slam into the wall and cause debris to fall from the ceiling. When one dragon dies, the other will devour its companion's remains, regaining 300 HP in the process; however, doing so leaves it open for attack while feeding, allowing the player to probably deal even more damage than the health it regains. Once both are defeated, the Heavy Ring can be obtained from the next room.

In this game, the Dragon Zombie is not a boss but a large, uncommon enemy. It can bite, jump forward, wail its tail at the player, and more importantly, breath a large poisonous fume that covers a large area of the room. It usually appears in areas where an almost endless horde of Mummies spawn from the ground.

One can be encountered in the Buried Chamber, another in the Sandy Grave, and yet another one also makes an appearance in Boss Rush Mode (Course 1).

Using the skeleton form exploit in Circle of the Moon 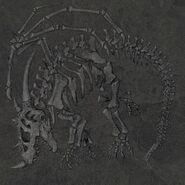 Retrieved from "https://castlevania.fandom.com/wiki/Dragon_Zombie?oldid=264749"
Community content is available under CC-BY-SA unless otherwise noted.